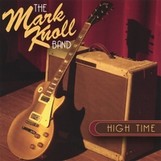 Great guitar sounds and a musical mix of blues, rock, and pop highlight this disc. The opener, “Gotta Give It Up” hints at what’s in store – big, bold guitar with a great tone kicks off the funky rocker that glides through changes and features a fine vocal from Knoll. Its perfectly-placed guitar fills hint at a technique that reappears throughout the disc. A tip of the cap to Robben Ford surfaces on “Fall Blues,” which has a jazzy feel, a fine organ solo, and big, soaring, singing guitar notes during Knoll’s solo. “Lay It On the Line” is a chunky rocker with tasty solo work. “The Bird Flew (This Bird Has Flu)” is an instrumental that modulates through several keys and group of chord changes. Knoll’s soloing is on the money and the tone is perfect, loud, but never obnoxious. Funk moves to the forefront on cuts like “You’ve Got a Lot to Learn” and “It’s Gotta Matter To Ya.”

The ballad “Sweet Little Thing” starts with a acoustic, and by the bridge we get a glimpse of Knoll’s harmonic knowledge via a set of changes that are surprisingly gorgeous.


This article originally appeared in VG‘s Jan. ’07 issue. All copyrights are by the author and Vintage Guitar magazine. Unauthorized replication or use is strictly prohibited.
The New Gear Yearbook