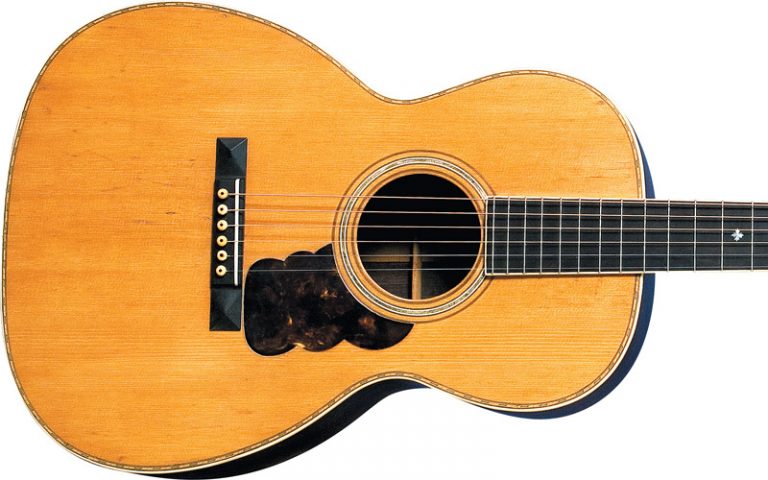 When a guitar maker introduces an innovative new feature at the same time an appealing, existing feature is being discontinued, the result can be a rare configuration of specifications. Although Martin introduced the 15″-wide 000-size body in 1902 and made the last Style 30 model in 1921, the two groups overlapped on only one guitar – this 000-30 from 1919.

Style 30 is a relatively rare Martin offering, and is not easy to identify because its primary distinguishing characteristic is an abalone soundhole ring, which is also found on the Style 27 guitars of 1857-1907 as well as the more obscure Style 34 of the 1850s-1907 and the exceedingly rare Style 33 of the 1800s. For identification, the 27 has brass tuners, the 30 has silver-plated tuners and an ebony bridge, the 34 has pearl tuner buttons and an ivory bridge. Style 27, whose style number seems out of place in a position below the non-pearl Style 28, was last made in 1907. Style 30 was introduced in 1899 and quickly became the sole remaining representative of the 30-series guitars from the 1800s.

Exactly why Martin discontinued Style 30 is a bit of a mystery. The more expensive Style 42, with its abalone-trimmed top, had been around since 1858 and would prosper into the 1940s. The ultra-fancy Style 45, introduced (first as a special Style 42) in 1902, would also make it to the 1940s and was reinstated in 1968.

The Style 30 seemed to be thoughtfully designed. Its abalone soundhole ring and multicolored wood marquetry around the top border offered an elegant middle ground between the herringbone-bordered Style 28 models and the pearl-bordered 42s, in price as well as aesthetics. With a price range in 1900 of $50 to $60, depending on body size, Style 30 was above the Style 28 models, which listed at $40 to $50, and below the Style 42 models, which listed at $70 to $80.

In the meantime, Martin had introduced an even slower-moving item – the 15″-wide 000 size. Although 000-size Martins are revered today as a quintessential design, they were not well-received by guitarists of the pre-World War I period. The 000 was the biggest Martin available at the time, although Martin had already supplied some larger dreadnought-size guitars to the Ditson company as early as 1916. Martins, and most other guitars of the era (with the notable exception of Gibsons), were still designed for gut strings and a repertoire of classical music. Martin’s X-pattern top bracing, combined with what was at that time an oversized, 15″-wide guitar, was just too much for gut strings to drive. Significantly, in the context of gut strings and large bodies, those early Ditson dreadnoughts were not X-braced. They were fan-braced in the style of the Spanish-made classical guitars.

Although the late Martin historian Mike Longworth wrote in his book Martin Guitars: A History that the first 000-size Martins had a 24.9″ scale, all that we have seen are 25.4″. It is possible that Martin increased the scale length by a half-inch on the 000s in order to provide a little extra string tension to drive the larger body. The full voice of the X-braced 000 wouldn’t be heard, of course, until the changeover to steel strings.

In 1919, with 000 Martins barely surviving – only 80 had been made from 1902-’18 – and Style 30s about to die out, the two entities came together in this one special guitar. In addition to this guitar’s one-of-a-kind status, it marks several important historical changes in the Martin line. Until this time, Martin had used a cedar neck with a grafted-on headstock. This guitar is one of the earliest to have a modern one-piece neck and headstock, with a mahogany neck. (Interestingly, Martin has recently begun using cedar necks on some guitars again.) The look of the grafted-on headstock survives in the diamond-shaped volute, not only on this guitar, but on current high-end Martins. Also, this guitar is one of the first to have celluloid binding with an ivory grain (a.k.a. “ivoroid”), which replaced the genuine elephant ivory bindings found on earlier Martins.

Anyone familiar with older Martins will know that 1919 is too early for a pickguard. A pickguard was not standard on any Martin model until the introduction of the OMs in 1929. The pickguard on the 000-30 is obviously not in the teardrop shape that Martin began using across the line in the 1930s. However, since the 000-30 was probably a custom-ordered guitar, and since many other makers of the era did install pickguards on their guitars, it is possible that the pickguard could be original, or it could have been installed not too many years after the guitar was made. In any case, it seems to be from the same era as the guitar. The tuners are silver-plated with mother-of-pearl buttons, and while they are not original to this guitar, they are actually older than the guitar, dating to the turn of the 20th century.

Although gut strings were still the standard for Martins when this guitar was made, it handles steel strings with no problem, and performs with all the complexities of tone that have made 12-fret 000s so coveted. It holds a special place in Martin history, not only as a one-of-a-kind guitar but as a historically important instrument that represents the end of one style of ornamentation and the dawn of several features that are still found on Martin guitars.