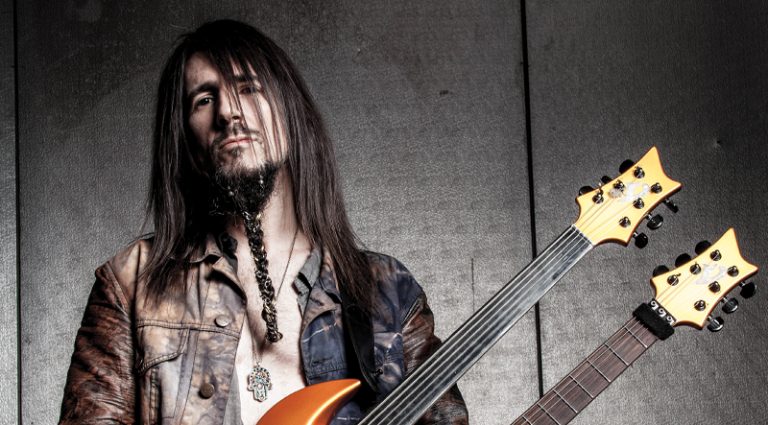 After bursting onto the scene in 1995 with the screwball shred classic The Adventures of Bumblefoot, Ron Thal (a.k.a. Bumblefoot) has shape-shifted his playing, adapting to the hard rock of Guns N’ Roses for Chinese Democracy, the alt rock of Art of Anarchy, and he recently joined Jeff Scott Soto, Billy Sheehan, Derek Sherinian, and Mike Portnoy in the prog-metal Sons of Apollo. The man known for playing doubleneck guitars recently spoke about his latest collaboration.

How does your guitar playing differ in Sons of Apollo compared to earlier projects?

It’s a different beast. With Sons, I participated in the writing and we were together in the studio. Before that, Derek and I were throwing ideas back and forth in e-mails; we challenged each other. In the other bands, that didn’t happen. It’s not like anyone was saying, “I came up with this riff in 11/16 for three measures, then 11/9, then we switch to this.” With everything else, I was learning existing songs or writing with other people where it was more straight-up radio stuff. If it was Art of Anarchy, I had moments in solos where I could definitely do my thing, but the overall setting was definitely not as progressive. So getting back to progressive stuff was nice. I forgot how much I enjoyed it.

You’ve played a variety of styles throughout your career.

I can play a punk song – and do it right – because I was raised on that stuff. All the punk, classic rock, old-school metal, prog, all the stuff from the ’70s and ’80s, and even ’60s. That’s always there. But I studied jazz, classical, and if you listen to my first album, it’s more progressive, and as whacky as Sons of Apollo. I’ve always been able to do that kind of music, it just straightened out over time. And playing with different people where it wasn’t a progressive thing. Which is good – you get in touch with your primal side.

When I go back to playing progressive stuff, I take it with me, and you can really put your heart into it with emotion and conviction. In my own stuff, anything goes, and in the past I would definitely go to strange places. Over the years, not quite as much… I’ve become a boring old dude (laughs).

Iconic people whose voices you’ve heard all your life! When I get to make music with them, it’s great. It’s wonderful when I get to write with one of them and do something fresh and new. That’s exciting – to hear a voice you love take the music in a direction you never would have thought about. That’s why they’re great.

Which guitars, effects, and amplifiers did you use for Psychotic Symphony?

I used an Engl Invader II, 100 watts going into a 4×12 Engl cabinet, and an SM57 and ribbon mic. I had a Dunlop 95Q wah – the one that activates as soon as your foot touches it; you don’t have to stomp on it like you’re trying to crush a roach. Then a bunch of TC Electronic pedals –  the Sub ’N Up, Flashback delay, Corona chorus, Shaker Vibrato, and the Vortex Flanger.

Guitar-wise, I had my Vigier Signature Series DoubleBfoot doubleneck with the fretted neck on the bottom and the fretless on top. It has DiMarzio Tone Zone pickups by the bridge and DiMarzio Choppers by the neck. The selectors are one through five – the bridge pickup as a humbucker, bridge as single-coil, bridge and neck together normal, fourth position is bridge and neck together out of phase, and the fifth position is the neck pickup. It’s the same for both necks. And there are just Volume knobs – no Tone knobs.