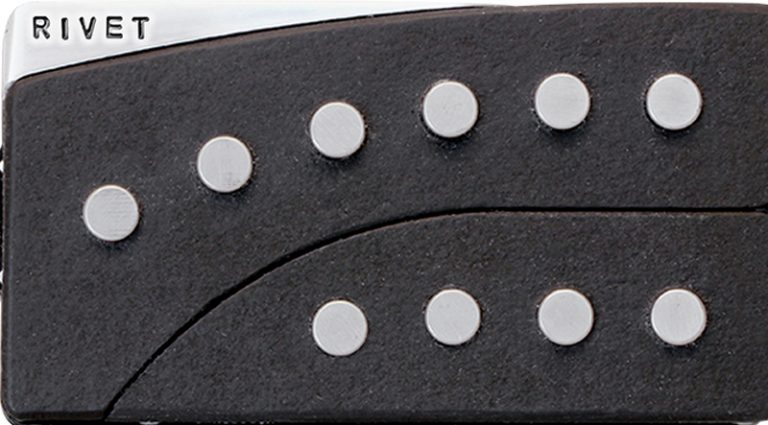 Rivet Pickups founder David Petschulat made the first locking vibrato with fine tuners for the EVH company, and worked stints at Kahler and Gibson.

With Rivet, Petschulat has developed a unique pickup design with two mini-coils that, once connected to their base, allow a variety of tonal options via various wiring cards.

Rivet pickups are the same size as standard humbuckers but have a very unique appearance thanks to their arrangement and number of polepieces. The ’63 is designed as a neck pickup and has a row of six pole pieces alongside a mini-coil of three poles; the bridge-position ’64 has a row of six poles with a four-pole mini-coil. The pickups connect to a card base with slip-on connectors; the base, in turn, has a slot for an interchangeable card. The unit tested with the Crunch 108 card allowed for a hotter output when the push/pull pot is in the down position. Other available cards include a Glass model, designed to give a more Tele-like tone from the set.

But where Rivet pickups really outshine other passive pickup designs is in their unique use of mini-coils to produce a clearer-sounding neck tone and a fatter-sounding bridge tone thanks to the arrangements of the mini-coils. For example, when the neck position is chosen, various amounts of the bridge’s mini-coils, positioned under the high strings, are added in to create a clearer and wider overall “neck” tone. Conversely, in the bridge position, the neck mini-coils positioned under the bass strings are mixed in to fatten things up.

The Rivet system is a highly idealized and extremely versatile set of pickups. Thanks to the ingenuity of founder David Petschulat, the ’63/’64 set offers a wider variety of tones and output levels than traditional humbuckers via it’s card system and imaginative use of mini-coils.