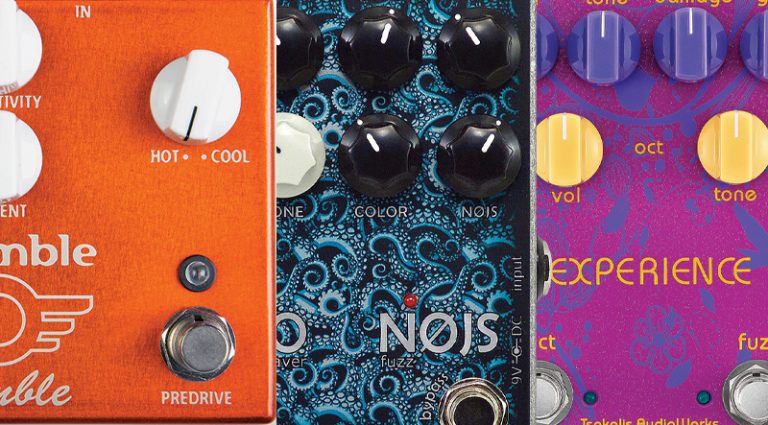 It seems that every other stompbox on the market has dual-footswitch functionality, packing two entirely different circuits into one housing. And judging by the trio here – all three of which hail from Europe – it’s a global trend.

The Tsakalis Experience from Greece packs a fuzz and an octave, conjuring psychedelia via two silicon transistors and all hand wiring. The results are vintage tones, plus blasts of analog synth, harmonica, sitar, and even trombone. The Level, Tone, and Gain knobs control the fuzz signal, while a fourth knob, labeled “Damage,” sets the bias of the fuzz circuit, thereby selecting the type of fuzz. Bring the octave section online via the footswitch and feel the full roar. The joy here is the burpy, farty nature of the tones, which are ’60s accurate and bring to mind guitarist Ed King’s perfectly sick fuzztone on the Strawberry Alarm Clock’s 1967 classic, “Incense and Peppermints.”

The Experience’s real sonic signature, however, comes from its FET clipping design. The way the circuits strangle-off each note is distinctive. Set its fuzz and octave as mild or hairy as you want, but that cool clipping effect is the star of the show. And, you can use either the fuzz or octave circuit on its own.

From Denmark, the Emma ON-1 Okto-Nøjs is an analog fuzz/octave with more emphasis on the low-end. The Okto control dials in as much sub as you desire, from a mild thickening of the tone to full-on bassy thud. Dry blends as much or as little guitar tone into the effect as desired. Full up, the unit delivers fairly seamless tracking; with guitar dialed down, expect more sputtery, lo-fi bass tones.

Stomp on the Nøjs (“noise”) footswitch for the fuzzier side of things. It’s an interesting circuit, with its own 8-bit flavors somewhere between fuzztone and ring modulator. Deployed together, the Okto and Nøjs produce everything from classic Hendrix to that ’70s Jeff Beck attack. A harmonic-distortion generator creates cool, weird textures, at times sounding like an octave up, as well as another down. It recalls the clipped, singing tone Jimi got on “Purple Haze.” The Emma ON-1 Okto-Nøjs is not an over-the-top dirty fuzztone, but a cool-sounding effect for guitarists and bassists alike.

Finally, from Finland comes the Mad Professor Twimble, combining MP’s Simble Overdrive and PreDrive into a single unit. The pedal delivers sweet, organic overdrive that reacts to the playing, much like a good tube amp. The Overdrive section sports volume and tone-shaping knobs. Sensitivity dials in distortion and compression, but it’s highly interactive with the next control, Accent, which manages the top end. It’s a powerful knob that can boost the crunchiness and make the overdrive section explode. Contour is a subtler EQ shift, brighter or darker.

The other footswitch fires up the PreDrive, a booster offering two gain levels: Cool (6 dB boost) and Hot (+10 dB). Use this side independently of the Overdrive for clean-boosted leads with just a little grit. Conversely, combine both sides of the Twimble for maximum firepower, with Overdrive setting rhythm crunch and PreDrive delivering a compressed punch for solos. The Twimble is a powerhouse pedal that captures the nuances of analog overdrive. Paired with a nice tube amp, it’ll put most players in tone heaven.