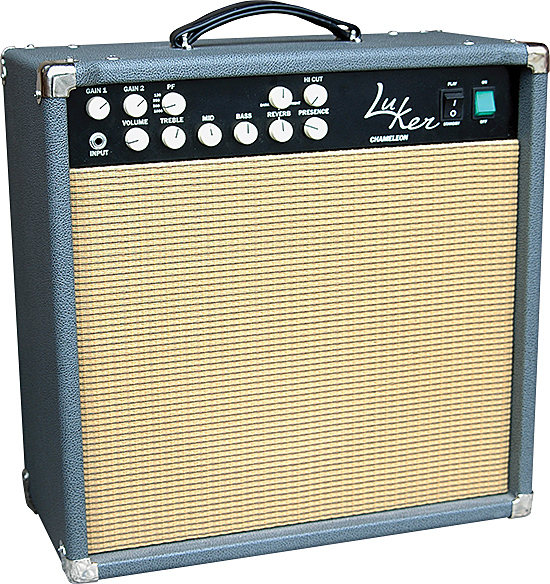 Considering the state of modern vacuum tubes, a surprising number of great tube amps are currently being built. And of those, every once in a while a truly exceptional amp that is also an astonishing value finds its way through the front door. The Luker Chameleon is one of those amps.

A Class A/AB Fender-based 20-watter with two 6V6 power tubes driving a choice of 12″ or 15″ Eminence Legend 75-watt speaker, the Chameleon is all-tube and hand-wired. Even the rectifier is a tube (GZ34). For preamp tubes it has a pair of 12AX7s, while the reverb runs off one 12AT7 and one 12AU7. The power transformer is a high-efficiency toroidal unit designed in-house, while the reverb is a long-spring Accutronics unit that also offers a Dark-to-Bright knob – very useful for getting just the right amount of atmosphere for the room.

The Chameleon’s hand-built cabinet is a work of art in itself, with dovetailed clear pine panels, a Baltic birch speaker baffle and backs, and hickory hardwood bracing. The front panel is powder-coated and the lettering is enamel screen-printed, all for increased durability. The back panel of the chassis is stainless steel polished to a mirror finish. The panel has a circuit breaker, a speaker impedance selector for 4, 8, and 16 ohms, and two speaker-out jacks. Three tolex colors are currently available (wine, black, and cream) and the grillecloth is also available in a variety of colors (wheat, white, oxblood, and silver-and-black). And at just 19.625″ x 20″ x 10″ and 41 pounds, the Chameleon is very compact considering what it offers.

And it offers a lot. There are the usual Volume, Treble, Mid, Bass, and Reverb controls, with both power and standby switches. There are also knobs for Presence and Hi Cut, as well as not one but two Gain controls. The most interesting switch on the faceplate, however, is labeled “PF.” More on that later.

The Chameleon’s three-band passive EQ knobs do enough without doing too much. The Bass control is great for tightening or loosening the bottom end, the Treble smoothens the highs without going “duh,” and the Mid might soon become your Strat’s best friend. Turned counterclockwise, it produces that highly sought-after scooped tone, and pushed to the right, it pumps up the upper mids, getting close to the tone circuit on a Clapton Strat.

As for the Hi Cut, who needs it when there’s already an effective Treble control? Well, while the Treble controls a wider spectrum of the highs, the Hi Cut takes off just the uppermost part of that range and is great for rolling off just the prickly tip of a driven Strat or Tele pickup, and it nicely notches back the sizzle of a pushed P-90.

One of the chameleon-like characteristics of the Chameleon is its two Gain controls. Gain 1 increases the American grit of the 6V6 power tubes. Once that’s dialed in to taste, the Gain 2 brings in a smooth, singing EL84-type sustain, but with more, well, balls. For someone addicted to P-90s, this amp is a godsend. Even driven, the Luker Chameleon is very quiet, indicating quality components competently connected.

The amp’s other chameleon-like trait is provided by the previously mentioned four-way PF switch. “PF” in this case stands for picofarads, and the switch allows the use of four separate capacitors for the Treble control, with values from 120 to 1,000 picofarads (pF). The 120 pF setting is the brightest, 250 pF is standard Fender issue, 500 pF gets Vox-y, and 1,000 pF is on the warmer side of Marshall.

The Luker Chameleon’s highs, even when cut, have an openness and airiness to them. The cut mids make it sound like a Strat has older and better pickups than it probably does, and not like someone is holding a pillow over the speaker cloth. The bass, even when extended, never goes “boom,” and rolled off, maintains its depth and just gets tighter. Whatever the tone, with the Chameleon, there’s a feeling that it came out easily and naturally without being forced.