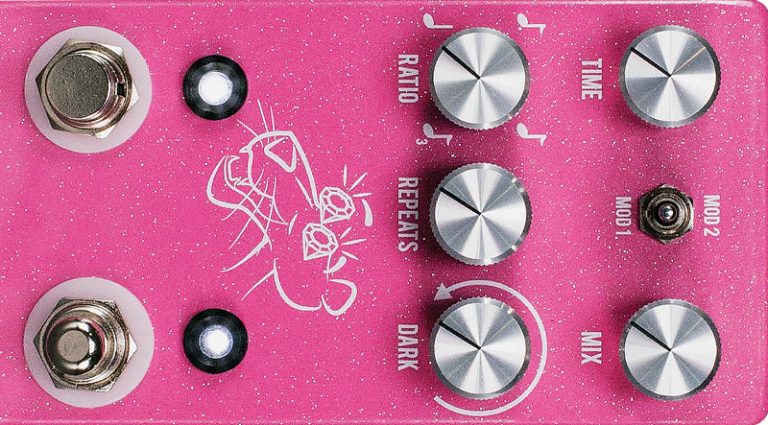 To mark the 10th anniversary of its original Pink Panther delay, JHS has created an updated edition that packs a plethora of cool appointments in an attractive box.

Modeled after the sounds of the old DOD DFX9, Boss DD-5, and Ibanez DE7, the new Pink Panther not only delivers the crisp flexibility of a digital delay, but a fine impersonation of a cozy tape echo.

Among the many features making the new Pink Panther such an adaptable delay are subdivisions, modulation, tap tempo, and up to a full second of delay. A side switch for Digital and Tape modes yields endless pristine repeats and warm, saturated compression. Global controls include a Time knob to adjust the speed of the repeats, a Mix knob to control the level of the effect, and a Modulation toggle with two choices of modulation as well as an Off setting.

But JHS didn’t stop there. The Ratio knob lets the user choose from several subdivisions – quarter notes, dotted-eighths, eighths, or triplets – while the Repeat knob controls the number of echoes, and the Dark knob brightens or darkens the signal. The pedal, which powers up with a 9-volt adapter, also has a Tap Tempo button.

But the proof is in the signal chain, and the Pink Panther indeed packs all the sounds promised by the many controls on this small, rock-solid package. Plugged into a Fender blackface combo, position one on the Modulation toggle yielded subtle shimmery chorus, while position two added warbling psychedelia. The Digital/Tape switch would prove extremely helpful, nailing everything from those U2 tribute band needs to full-blown rockabilly by emulating vintage-sounding slap-back tape echo.

Overall, the new Pink Panther’s ease of use makes it a delight for the compulsive knob turner, serving up the best of both worlds: the punch and fidelity of a digital delay and the plush earthiness of analog counterparts.