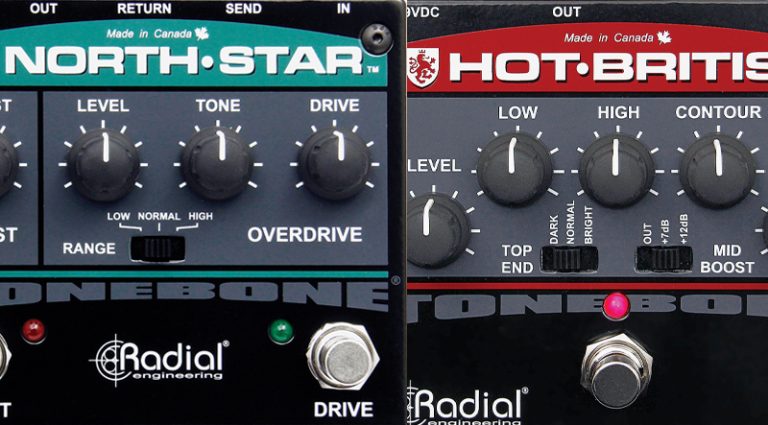 Since the mid ’90s, Radial Engineering has been making audio products with a rep for superb performance and top-tier construction. Its Tonebone pedal line has gained exceptional street cred, finding long-term arrangements on the pedalboards of some of the baddest cats in the six-string arena.

The company’s Hot British V9 is an updated solidstate version of the Hot British tube distortion pedal. It’s smaller than the original but has all the ballsy Marshall plexi-isms, powers with a 9-volt adapter (instead of the 15-volt), and no longer has a 12AX7.

The unit’s switches and knobs deliver a cornucopia of tonal settings, its tight work area is home to Level, Drive, and two post-distortion EQ knobs labeled Low and High. The Contour knob controls the personality of the rig from easygoing to outright rude. The two switches offer three-position tone-shaping (Dark, Normal, and Bright), with the second switch offering variations in Mid Boost.

The unit also contains a Class A buffering circuit to drive longer cables and maintain tonal integrity. It’s small yet heavier than most pedals, but it unleashes a wide variety of heavy-duty distorted sounds. Played through a Fender blackface combo you have your pick of everything from gritty Chicago blues to a London street riot with goo-gobs of cantankerous crunch and daylong sustain.

A relatively quiet pedal, the V9’s swarm of controls also presents the option of mix-slicing top-end with thickness or lower-gain midrange chunk. It’s a versatile pedal with the potential for violence, but its strength lies in its portability and willingness to help you get what you need out of mystery backlines. In other words, it’s a great traveling companion.

Another Tonebone offering is the North-Star Overdrive, marketed to country guitarists with a rock-and-roll edge. A two-in-one pedal, the North-Star delivers articulate overdrive as well as 24dBs of clean boost to push a clean amp to the outskirts of chunky oomph. Tough and compact like the Hot British, the North-Star has a user-friendly interface that allows you to jump right in and get going with Level, Tone, and a Drive knob, and a three-way Range switch (Low, Normal, and High) to finetune EQ.

Max the Drive knob, and you’re instantly aware that the North-Star is made for rock guys who work in the cleaner end of the sonic spectrum. Also perfect for country players who require beaucoup articulation, clarity, and zero mud, this pedal works great when stacked with other overdrives. It’ll also push a dirty amp for some righteous solos without messing up your tone. Its clean responsiveness shines with a Telecaster and propels you to kick out your best double-stop twang and cluck.

The Boost side is a thing of beauty, offering the absolute correct amount of robust gain without being an overdrive. The North-Star also comes with Send and Return inputs that engage when the Boost is on, allowing you to add time-based effects along with clean boost.

From diabolical distortion to semi-breakup, Radial Tonebone’s Hot British and the North-Star stomp boxes provide the teeth that give your music bark some bite.