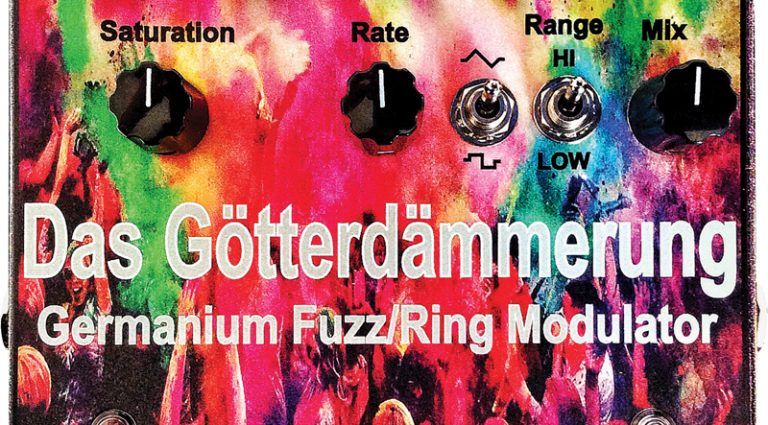 Named by Flaming Lips guitarist Steven Drozd after composer Richard Wagner’s Ring Cycle opera, Crucial Audio’s lavishly named Die Götterdämmerung Germanium Fuzz/Ring Modulator is a wild, wicked pedal. (Note the double pun of germanium and Ring Modulator.) Built in Delaware by pedalsmith Steve Kollander, this box, as its name suggests, features two effects in one housing: a classic fuzz on the left and a ring modulator on the right.

But don’t be daunted by all the controls. The unit is designed for tweakers and knob-twisters. The three controls on the vintage side are Fuzz Output, Fuzz Gain, and Shape, all taking advantage of dual NOS 2N404 germanium transistors. If you’re not a techie, don’t worry – Output sets the level, while Gain brings up the desired degree of fuzztone. For many, this will be sufficient fuzz, but dialing in Shape can deliver a real blast of sustain, like saturated fuzz, which you don’t find every day.

The ring modulator side of Die Götterdämmerung has enough controls for the cabin of Apollo 11. Its frequency generator aids in the sound torture, as you take a standard guitar signal and whip it good. Using the parameter controls, you’ll find tones from “robot talk” and 8-bit squonks, to the classic ring modulations that Jeff Beck used in the ’70s Wired era. A Hi/Low range switch kicks the circuit from high-end squeak to low-end blast – again, turn knobs and flip switches until you find the sounds that will happily bliss your ears out. You can also plug in an expression pedal to adjust the ring modulator’s pitch and frequency at a gig.

By combining ring modulator with real germanium fuzz, Kollander has created a cool hybrid of fun and functionality. Players who like Zappa and Beck, as well as modern rockers into shoe-gazer, industrial, and djent will love its extreme sounds. No question, Crucial Audio has raised the bar with Die Götterdämmerung.