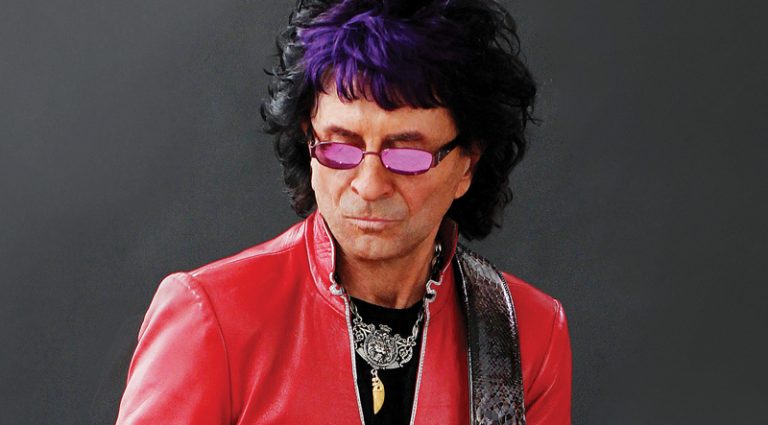 Guitarist/songwriter Jim Peterik, who helped compose hit songs like “Eye of the Tiger” and “Hold On Loosely,” has remained active in music and other artistic pursuits – and has long been an avid guitar collector.

“I’ve added a few beauties in the last couple of years – a ’67 Firebird I in Inverness Green, near-mint condition and its P-90s scream,” he said. “There’s also a one-off Gibson Custom ‘map guitar’ and an Epiphone Crestwood from ’59; I once saw Steve Marriott playing one of those, and searched for years to find one.”

Of course, he still has the ’69 Les Paul goldtop he has used for decades, particularly in the Ides of March. “It’s in constant stage and studio use,” he said. “I used it recently on the PBS Soundstage ‘Cornerstones of Rock’ special.”

In 2014, Peterik issued an autobiography, Through the Eye of the Tiger, and for ’18 he’s producing a calendar that showcases his collection thematically – Jaguar and Jazzmaster “surf guitars” with a Seeburg jukebox, “desert island” essentials, and back-to-school “student models” in September.

“It‘s a teaser for my coffee-table book, Guitars That Followed Me Home, which will have more-detailed shots and stories behind the guitars,” he said.

He has also put a unique twist on a way to benefit local charities.

“Nearly every year, I auction off a ‘guitar tour’ as a part of my contribution to causes such as Chicago’s H Foundation for cancer research,” he said. “The dads and moms who bid invariably do it so their children can see my collection and hear my stories. I stress the charm inherent in older instruments. I’ll do a Pagey lick on my ’56 Tele, and they get it; they’re literally shaking when I let them hold and strum a ’58 Les Paul.”

While discussing the vintage-guitar phenomenon, Peterik cited the affection for instruments shared by musicians of his generation.

“Babyboomers like me certainly have a special lust, especially for the instruments they couldn’t afford or their parents wouldn’t let them buy when they were teens,” he said. “Now they have the means, so it’s ‘Dammit, I’m gonna buy that ’61 slab-board no matter what my wife says!’ (laughs) These axes are more than great guitars, they’re recovered pieces of our past.”

He’s also encouraged by the enthusiasm babyboomers show when they talk to younger players about the historical importance of vintage instruments.

“The more millennial bands I do shows with, the more I see how the legend of seasoned wood and hand-wound pickups has really seeped in,” he said. “Many are using their first royalty check to buy a (vintage) axe.”

As for collectors, he says the best is yet to come.

“I feel we’ve not yet hit a peak in prices,” he said. “As rock legends pass away or age out, the guitars they made famous live on. The more great instruments are displayed in places like the Songbirds museum, in Chattanooga, and the Musicians Hall Of Fame, in Nashville, the more prestige they will garner. They become stars in their own right.”