The idea of making “presentation- grade” guitars – special instruments meant as much for marketing as for rich customers – probably goes back to the beginnings of guitarmaking.

Certainly by the late 19th century, when industrial expositions and World’s Fairs proliferated, and prizes were awarded to superior instrument makers, it was common for guitar builders to create presentation models to compete in the judging and impress potential buyers. In the old days, these were often made of premium timbers and heavily decorated with abalone and pearl inlays.

The craze for fairs began to fade and, as a more commercial economy matured at the end of the 19th century, the National Association of Music Merchandisers (NAMM) essentially took over the presentation function as instrument makers brought their wares, including special and limited-edition guitars, to entice retailers to carry their lines. The 1982 Epiphone Map guitar was one of those kind of special guitars intended to be more of a promotional item than an actual part of the Epi roster.

At the time this guitar appeared, the Gibson company was on the ropes. It and other American companies had suffered a pummeling from Japanese competition during the ’70s “copy era.” Plus, Gibson was owned by Norlin, part of a South American conglomerate that had lost some of its interest in making guitars. Quality control was not what it once was. Part of Norlin’s survival strategy – like so many companies in the ’70s – was to begin to shift its production away from expensive unionized workers in the North to cheaper, non-union labor readily available in the primarily agrarian South. In 1974, Gibson opened a second guitar factory in Nashville and began to slowly move production out of its historic Michigan plant in Kalamazoo.

By the early ’80s, the transition was almost complete. Most Kalamazoo workers had been laid off. But in ’82, Gibson decided to produce a few models of its “budget” Epiphone line in Michigan, and called some of its craftsmen back to work. At that time, most Epiphones were being made either in Japan or (with some of the Genesis models) Taiwan. It’s not known if the plan was focused on boosting the Epiphone line in a period of economic recession or simply to give some work to hard-hit former employees. Anecdotal information suggests that, for reasons unknown, the Gibson brand name could not be used at the Kalamazoo plant, but that seems a bit odd and it’s more likely that they wanted to pump up Epi sales.

The principal Epi models produced in the U.S. were the one-and two-pickup Spirit models, nice little utilitarian double-cutaway guitars reminiscent of, but different from, the Les Paul Special. Another American-made Epi at the time was the Special, basically an SG variant. Most, it’s believed, have serial numbers indicating that they were made in the latter half of ’82. They were not promoted after September, though some were made at least into October.

As one would expect, Gibson made a great deal of noise about resurrecting the Epiphone line with its made-in-the-U.S. American Series. Their ads even offered prizes for test driving one of these new Epis at your neighborhood dealer. The Grand Prize? A trip to Kalamazoo – “an All-American city” – for one day, plus three days in Nashville!

It was during this promotion that the Epiphone U.S. Map guitar was conceived. Basically, they took a couple of blocks of nice mahogany, glued them together, then scroll-sawed out the Lower 48. Sorry, Alaska and Hawaii, but you might take some consolation in being the players shoulder and elbow, respectively! The thin Gibson neck with rosewood fingerboard was glued into the East Coast. These were basically twin-humbucker guitars with Schaller BadAss-style adjustable finetune bridge/tailpieces, basic three-way select (located in San Francisco), and two volumes and two tones. The serial number of the example shown tells us it was completed on September 13, 1982.

You might expect this to be better to look at than play, but it’s remarkably well-balanced and easy to pick. And a pair of hot Gibson humbuckers is never shabby. Like any pointy guitar, the points are always vulnerable, and with this guitar’s geographic verité, that is even more true about one of these maps! Both Maine and Texas had better mind that mic stand, or plan to secede!

Perhaps it was because of the political statement they made (there was still plenty of anti-Japanese sentiment in ’82, and a bad economy didn’t help), but the Epiphone maps were very well-received. So much so that Gibson decided to convert them to a Gibson model, which debuted in ’83. They were featured prominently in Gibson advertising, with its “made in U.S.A.” theme, shown in the photo, as if they were being hand-carved! Some of the information floating about says the Gibsons were simply the Kalamazoo Epiphones with replaced head faceplates. But whether that happened is anybody’s guess. And whether or not all map guitars were produced in Kalamazoo, or if any were made in Nashville, are also unknown. According to Gruhn’s Guide to Vintage Guitars, nine maps were produced with American flag paint jobs.

How many of these promotional map guitars, Epiphone or Gibson, were produced in ’82-’83 is another unknown, but the number would have been, by definition, pretty small. These were not exactly “production” guitars and weren’t made on numerical carving machines. They have to be considered rare birds.

After the demise of the Spirit, Special, and U.S. Map at the end of ’82, U.S. production of Epiphones ceased, though a few later models were either assembled (e.g. Spotlight) or completely (e.g. Coronet) made in America. In ’84, Epiphone production was outsourced to Korea, where it remained until other Asian countries got into the game. Also in ’84, Gibson finally closed the Kalamazoo plants for good. Part of the property was sold to a group including ex-Gibson employees to house the new Heritage guitar company. The Epiphone U.S. Map guitars were among the last Gibson guitars to be made in their longtime home of Kalamazoo, All-American city! 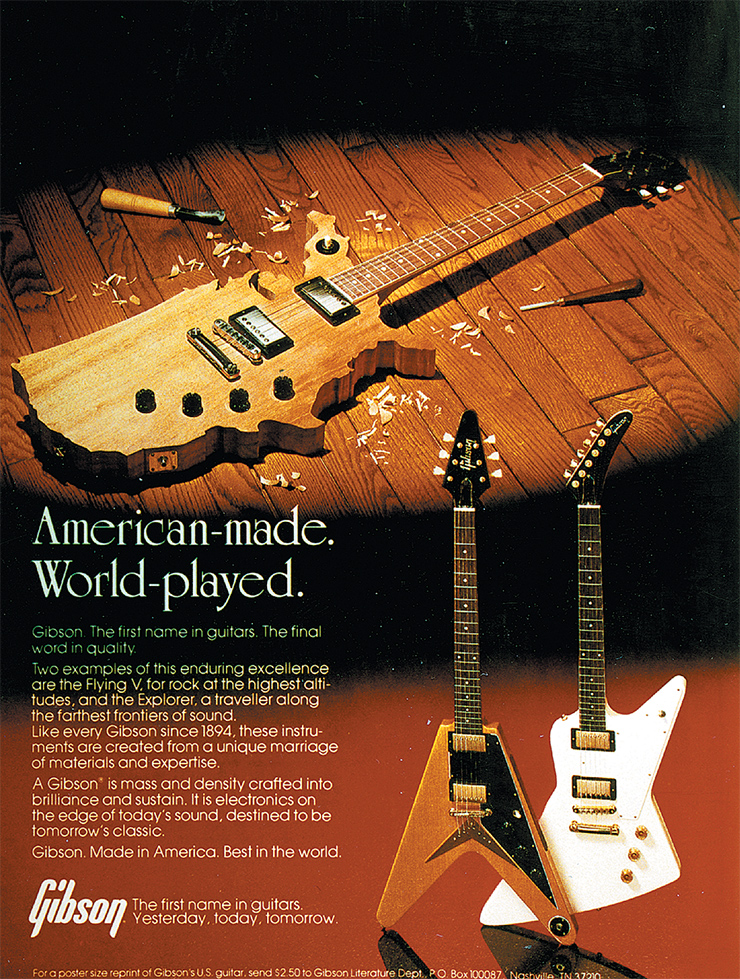