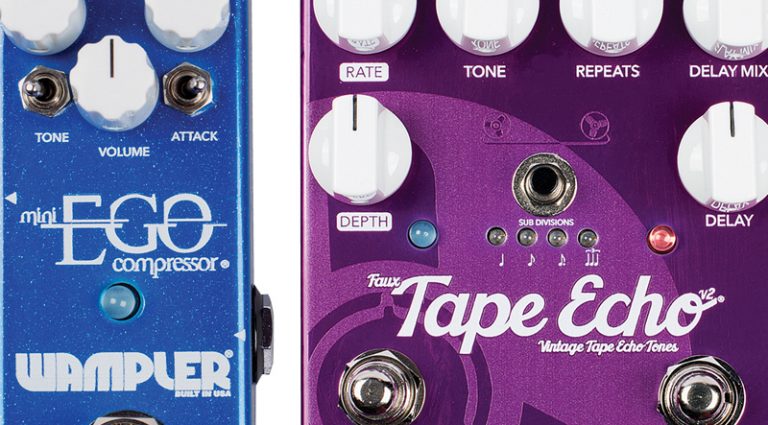 With an extensive line of nearly 30 devices, it’s no surprise Wampler Pedals has entries in both the traditional-size and a micro pedal markets – and pedals to cover both ends of your board.

Placing a compressor toward the beginning of the signal chain is a typical strategy. And a compact version of the Wampler Ego Compressor, the Mini Ego Compressor, is Brian Wampler’s answer to the need to fit as many sonic options into as little real estate as possible.

The Mini Ego’s Blend, Volume, and Sustain controls are packed side-by-side, with Attack and Tone double-throw mini switches, a stomp switch, and an On/Off light also squeezed onto the top of this small box. The Attack switch offers two options for how quickly the original signal is impacted, and the Tone control adds the high end. Volume is, well, volume, while the Sustain control allows for increasing levels of signal impact.

Plugged through a late-’50s Ampeg Jet with a repro 10″ Jensen speaker, subtle changes to the Mini Ego’s Blend knob allowed the natural guitar tone and player dynamics to combine with the controlled sound for a natural attack with enhanced sustain and transient spike control. Signal compression typically calms the trebly attack, but a flick of the Mini Ego’s Tone switch added some compensating high-end sparkle without the abrupt attack, making for clear rhythm chords.

For the soloist who wants a clean, singing sustain without fuzz or overdrive, the Ego Mini offers plenty of extra gain, and a natural sound with all the benefits of the typical compressor and none of the squashed dynamics. The Ego Mini’s small size more than makes up for its tight switching arrangement.

Delay and reverb are typically found at the other end of the pedalboard, as overdrive and distortion can uncontrollably magnify those effects. Turns out Wampler has you covered down there, too. The Faux Tape Echo v2 pedal offers digital control over the echoes with analog sound processing. It utilizes six knobs, two footswitches, and a Subdivision push switch for selecting the selected delay tempo.

Despite the hefty array of controls, the Faux Tape Echo v2 is a low-noise device with no evidence of unmusical digital glitching. Bypass and Tap Tempo stomp switches start things up, with Rate controlling intensity, Depth adding a degree of modulation, and Repeats allowing everything from a single slapback to infinite echo. Delay Mix is similar the Ego’s Blend knob, adding the original analog sound to the mix.

Through the same Ampeg at a small club, the Faux Tape Echo v2 offered classic early rock sounds and longer delays that were easy to dial in for soloing. Though it was easy to tap in the meter, the Subdivisions switch was difficult to access without bending over for manual adjustment. This feature offers quarter, eighth, dotted eighth, and triplet repeats. The dotted eighth setting was favorably musical in response especially for soloing. And thanks to the digital delay/analog blended sound, the Faux Tape Echo v2 was particularly effective on a solo jazz guitar gig where chord development in triplets was enhanced with clarity along with the warmth associated with an amplified jazzbox.

The ability to blend natural guitar with processed sound gives both pedals an organic feel without excessive noise or digital sterility. And the oversized Faux Tape Echo v2 is more than offset by the diminutive Ego in the struggle for pedalboard space. Indeed, the Ego Mini and the Faux Tape Echo v2 would supply a fitting beginning and end, respectively, to any pedalboard – but as a general rule, put the wah before the Ego.