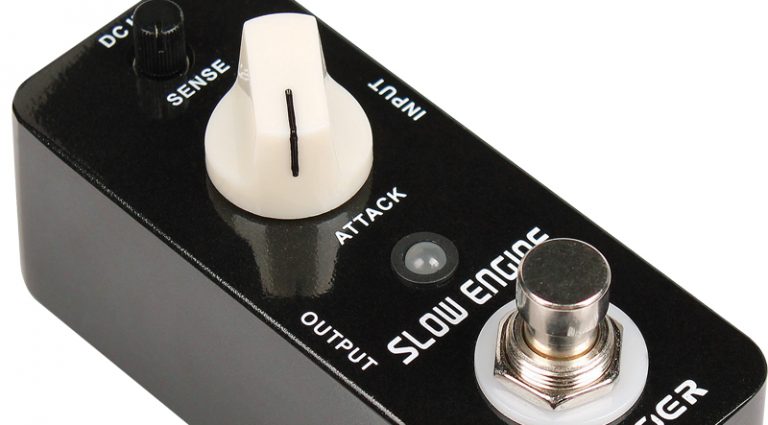 Long out of production, the Boss Slow Gear was one of the coolest pedals of the ’80s, duplicating the sound of a volume swell without putting your pinky to work. Mooer has updated this effect with its new Slow Engine.

The Slow Engine uses the popular micro-pedal format that takes about half the footprint of a traditional stompbox. Its only downside is that, with no room for batteries, these designs are DC-only, but the Slow Engine works with most any 9-volt adapter. It also sports true-bypass switching and a rugged metal chassis.

The Slow Engine has just three controls – Attack, Sense, and the On/Off footswitch. Once you activate the effect, tweak the mini Sense knob to determine if you only want the swell on some notes or all of them. Turn the control down, and you will hear swells only on notes you pick the hardest; turn it all the way up and you will hear it on every note. Turn Attack down to hear the effect kick in quickly, while higher settings give a long, slow attack. Keyboardists have had this kind of synth control for decades, so it’s great to have it available to guitarists again.

In use, the Slow Engine exhibits that cool, spacey sound great for proggy parts or violin-like melodies. It works brilliantly for lead lines, but also chords. Slide guitar sounds thrilling with its electronic swells – think of David Gilmour’s ethereal lap steel on Pink Floyd’s “High Hopes.” The Mooer box will work with bass, too, adding deep swells like a cello or bowed bass, or combine the Slow Engine with reverb to add more spatial dimension and chorus for even more fairy dust. Best of all, the pedal is affordably priced and absurdly addictive.