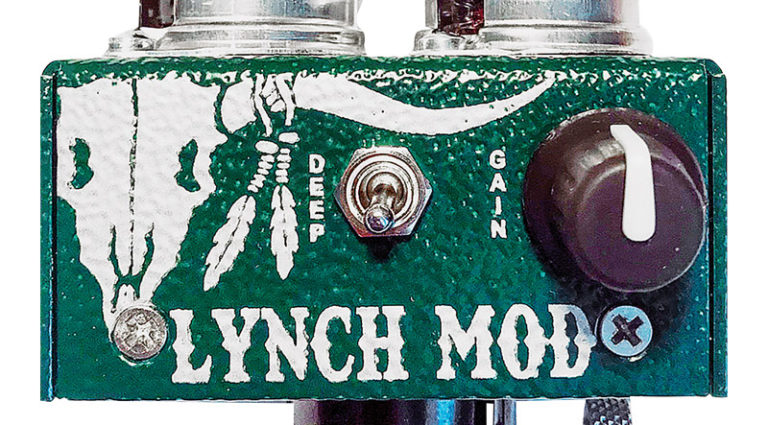 The device uses two 12ax7 preamp tubes on a base that fits snugly into the V2 socket of classic Marshall amps, including JMP and JCM 800, as well as several reissues. It was Lynch’s idea to add the Gain knob, which goes from unity to scorching hot, and a Deep switch for a low-end bump.

Installed in a 1973 50-watt Model 1987 in under five minutes, the Lynch Mod proved easy to use. With a reissue Les Paul, the hot-rodded amp produced tones from juicy blues with great dynamics to full-on shred with a sweep of the gain. A flick of the Deep switch with a ’63 Strat rounded out the single-coils’ bass tones. Both guitars’ Volume knobs were very interactive with the Lynch Mod’s gain.

Unlike certain pedals, the Lynch Mod mostly avoided added noise. Another benefit was that it did not overcompress chords or notes, retaining the dynamics and articulation of the pick attack. According to the manufacturer, this is a result of layering the gain stage atop the cathode-follower tone stack.

At a cost comparable to high-end pedals, the Lynch Mod is an alternative for players looking for hotter tones from their Marshalls without making expensive and value-destroying mods.