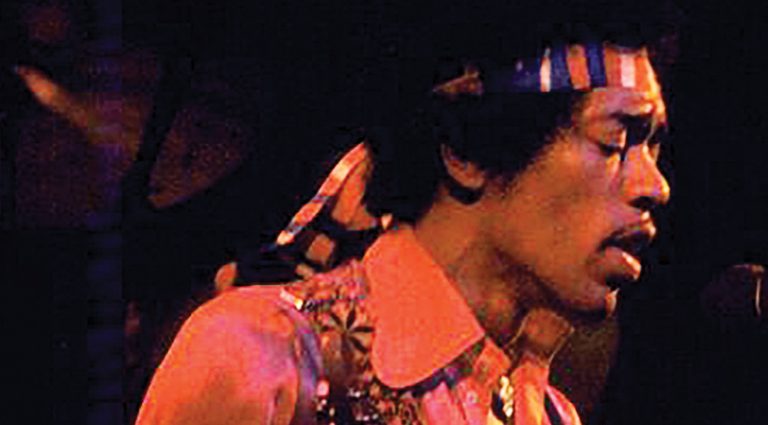 Jimi Hendrix learned the hard way that signing contracts for fast money can come back to haunt you. Hendrix’ naiveté forced him to settle a breach-of-contract dispute with Ed Chalpin of PPX Industries by providing him a new album. Accepting the help of Wilson Picket/Electric Flag drummer Buddy Miles and his bass-playing Army pal Billy Cox, the Band of Gypsys was also an opportunity to appease members of the Black Power movement who accused Hendrix of cozying up to white audiences. Thus, the first high-profile black-rock power trio was born.

Produced by Janie Hendrix, Eddie Kramer, and John McDermott, the live album here was mixed from the original 8-track tapes by Kramer, and mastered by Bernie Grundman. While Hendrix aficionados own the 1970 album Band of Gypsys and 1999’s Live At The Fillmore East, Machine Gun features the band’s first performance in its entirety.

The trio performed four shows between December 31, 1969 and January 1, 1970 at the Fillmore East. Songs from the third and fourth shows appear on Band of Gypsys. “Hear My Train A Comin’,” “Changes,” and “Izabella” are the only songs from the first show to have been “officially” released, appearing on Live At The Fillmore East. They are included on this album with the rest of the set; Machine Gun marks the first time the complete first show has been officially available.

This album is continuity, flow, and the escalation of power within 11 songs. The band overcomes minor hiccups beginning with “Power Of Soul,” to synchronistic Zen by “Hear My Train A Comin’.” The blues unifies, catapulting the band into an intense synthesis of aggressive drumming, deep bass, and maximum strength Chitlin’ Circuit rock guitar.

The trio is rehearsed, but not etched in granite. Hendrix never played the same way twice, and the band obliges. “Machine Gun” finally in its unedited form, paints the Vietnam War in Technicolor and Univibe. On the lesser-known R&B cover “Stop,” the band goes places their contemporaries would fear to tread. The close vocal harmonies, elastic blues bending, and the beautiful audacity of Miles is sublime.

The Band of Gypsys never had the commercial appeal of the Experience, but that fleeting moment in time was enough to inspire a generation of Hendrix fans to understand that with the power of soul, anything is possible.