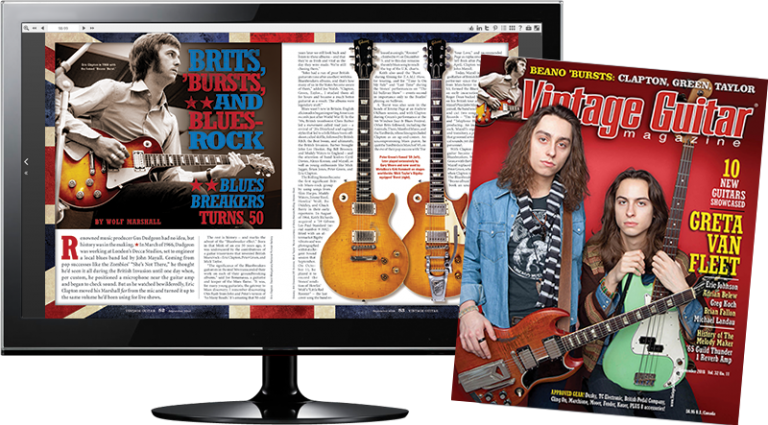 36 Successful Starter
The Gibson Melody Maker
In terms of sales, Gibson solidbodies of the late ’50s and early ’60s mostly lagged behind Leo Fender’s wares. One exception came in the form of a budget-friendly model aimed at an underserved beginner market in the days before competition from Asian builders. | By George Gruhn and Joe Spann

40 Strung-Up Whodunit
The Washburn Stage A-10V
In the ’60s, it was easy to identify the builder of odd-label Japanese-made electrics – the answer was always “Teisco!” Riddles persist today, but practically any unidentified Japanese maker becomes “Matsumoku.” That’s certainly true of this guitar. | By Michael Wright

46 Wet/Dry Bag
The Guild Thunder 1 Reverb
As soon as guitarists began to use reverb-equipped amps in the ’60s, many bemoaned how the effect muted their sound. Then, Guild helped lead the way in adding reverb while keeping everything else that was good about a tube amp. | By Dave Hunter

82 Brits, ’Bursts, and Blues-Rock
Blues Breakers Turns 50
History was made when, in 1966, a producer positioned a mic near Eric Clapton’s Marshall, then watched bewilderedly as the young virtuoso moved the amp. The resulting “Bluesbreaker effect” underscored the contributions of a guitar triumvirate that invented British blues-rock. | By Wolf Marshall

88 Loud Launch
Greta Van Fleet’s Jake and Sam Kiszka
The band’s story, like its attitude and music, is classic rock; four kids (three of them brothers) from small-town Michigan drawing accolades from generations of music fans cheering the return of rock music that starts with a Les Paul plugged into a Marshall. | By Ward Meeker

94 Hawaii’N Steel
Sol Hoopii’s 1938 Rickenbacher Model B-6
As the most-famous musician from his home territory, the “King of the Hawaiian Steel Guitar” could play any instrument he chose. For the longest stretch of his life, he favored this one. | By Peter Blecha

26 Dany Franchi
Bitten by the Blues in Italy

54 The (Way) Back Beat
A Euphonic Legacy: The Larson Brothers, Finale and Postscript | By Peter S. Kohman

62 Fretprints
All the King’s Men | By Wolf Marshall