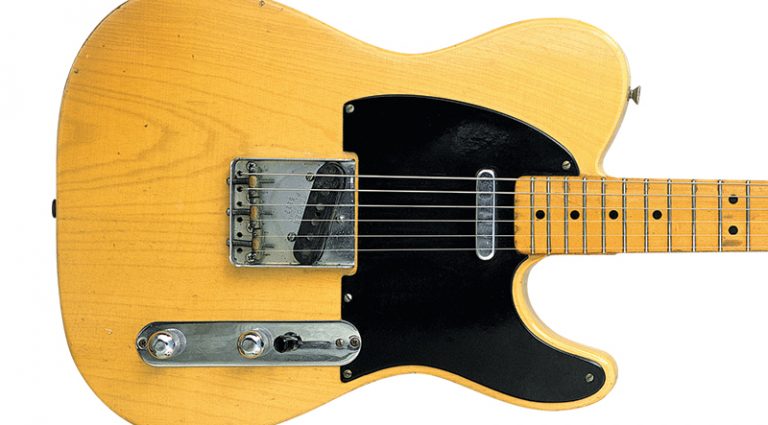 The world’s greatest electric guitar was invented by a radio repairman.

Okay, we could debate just what is the world’s greatest electric guitar, but the fact is that one of the legends of collectible solidbodies was invented by a guy who wasn’t even a musician; Leo Fender had just started building amplifiers and lap steels when he saw Merle Travis play a solidbody guitar built by Paul Bigsby.

Fender’s first Spanish-style guitar was a lesson in functional simplicity: a solid body (feedback was a huge problem for amplified instruments of the day), one pickup, and a bolt-on neck. And it wasn’t just that Leo wanted the guitar to be easy to service and maintain; beyond being pragmatic, Leo was frugal. His guitar had to be made using the same machinery that made Fender lap steels, so there would be no fancy set neck or body carve.

Work on Leo’s first guitar began in late 1949. The shape was “designed” by George Fullerton, who Leo had hired to help repair amps and lap steels. And his concept has been maintained since its inception – a prototype made in ’49 looks very much like any Tele from any era, save for its lapsteel-like headstock. And when it debuted at the July, 1950, NAMM show it carried the name “Esquire.”

Though response wasn’t strong, feedback from players led to improvements including a steel truss rod and a second pickup close to the neck. Later that summer, the guitar was introduced to the market as the “Broadcaster,” in tribute to the radio – the means by which most of its notes would supposedly be heard. It listed for $169.95. But soon after, Gretsch asked Fender to drop the name because it had been granted a trademark for its use on drums. Fender abided, and from February until August of ’51, finishers clipped the word “Broadcaster” from headstock decals. Thus was born the “Nocaster,” a name never adopted by Fender, but well-known amongst vintage guitar enthusiasts. The final burst of inspiration came when Leo borrowed a name from the television – the cutting-edge broadcast technology of the day.

The guitar surprised naysayers by selling well in its first few years. And shortly thereafter, the solidbody guitar took flight as other companies jumped into the fray.

• Pickups are both fully height-adjustable.
• String ferrules are recessed into the back of the body.
• Fender employees typically penciled in build dates on body-end of necks, in body neck cavity, and/or bridge pickup cavity (the latter often on masking tape).
• Neck screws changed to Philips-head in early ’52.
• Audio controls in ’52 used 250K-ohm potentiometers (pots), one .05-microfarad capacitor between the switch and master volume pot, and one 15K-ohm resistor soldered to the pickup selector; in ’53, the selector resistor was changed to a .1-microfarad.
• Offered only in “blond” finish.

This article originally appeared in VG July 2005 issue. All copyrights are by the author and Vintage Guitar magazine. Unauthorized replication or use is strictly prohibited.