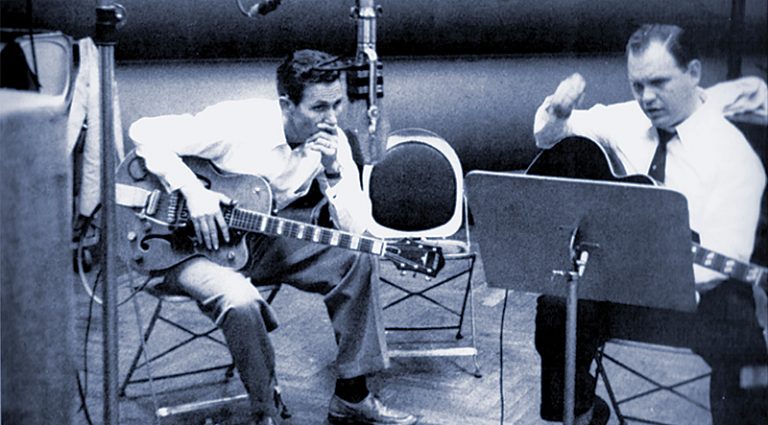 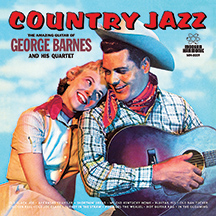 When Chet Atkins arrived in Chicago for his first RCA recording session in August 1947, he was astounded to meet George Barnes, who’d been hired to play rhythm guitar. To Chet and others, Barnes was guitar royalty, a virtuoso the teenaged Atkins encountered the same place he’d first heard Merle Travis and Les Paul – on the radio. A versatile jazz and blues prodigy, Barnes was playing on blues sessions in his teens. By ’39, he was a regular on network radio programs from Chicago, particularly the country-oriented “WLS National Barn Dance” and “Plantation Party.” A friend (and rival) of Les Paul’s, Barnes was an established picker when he recorded under his own name in 1940.

Except for World War II army service, Barnes remained an A-list studio musician in Chicago until moving to Manhattan in ’51 and joining that city’s elite cadre of session players. Along with sessions, Barnes played clubs and recorded solo albums. The timing was right: Les had given electric guitar instrumentals mainstream popularity and Chet’s eclectic LPs were popular well beyond the country audience. 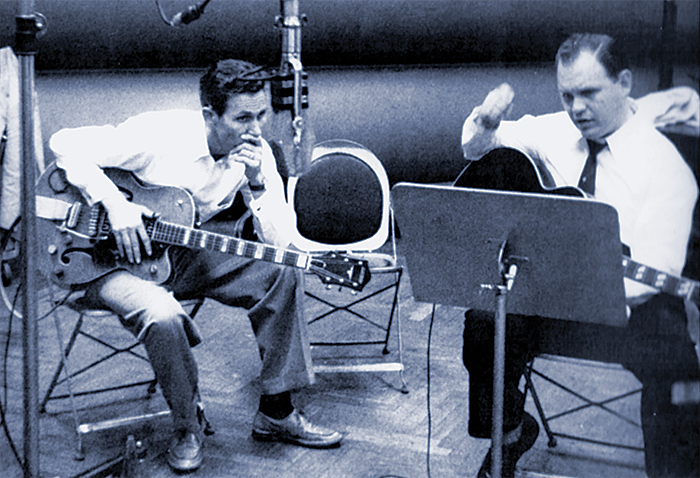 On “Turkey Cobbler” (“Turkey In The Straw”), he plays clever variations on the melody. “Old Kentucky Ramble” (“Old Kentucky Home”) features him stating the melody, then launching smart, entertaining improvisations, always daring without playing over the listener’s head, balancing the progressive and the commercial. He even adds new ideas to his restrained take on the traditional love song “In The Gloaming.”

The originals are no less stunning. “Banjo Hop” features furious single-string tenor banjo passages. He unleashes cascades of stinging, rapid fire passages on “Rockabilly Boogie” (a newly coined term in ’57). Since studio players were expected to play other stringed instruments when needed, it’s no surprise Barnes excelled on “Bass Guitar Blues,” possibly among the first solo vehicles for electric bass. The energy of “Hot Guitar Rag” is balanced by “Strollin’ Low,” reflecting Barnes’s 20-year command of the blues.

Modern Harmonic has faithfully reproduced and remastered the original LP (in red vinyl) with a difference. The new gatefold cover contains Barnes memorabilia, photos, and informative new notes by his daughter Alexandra Leh. Long revered among collectors as a model of Barnes at his best, the album is now available – at a reasonable price – to generations not around when he recorded it.