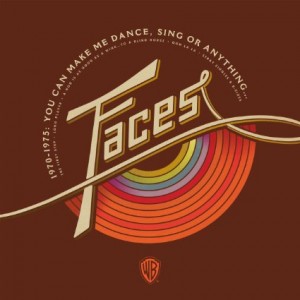 When singer/guitarist Steve Marriott left England’s Small Faces at the end of ’68, to form Humble Pie with Peter Frampton, the band replaced him with two émigrés from the Jeff Beck Group – singer Rod Stewart and Ron Wood, switching from bass back to his main instrument, guitar. They joined bassist Ronnie Lane, drummer Kenney Jones, and keyboardist Ian McLagan, who shortened their name to Faces.

The band was nearly as famous for their alcohol consumption as their music; not for nothing was a Rhino comp titled Five Guys Walk Into A Bar. Their raucous live persona translated into the studio with mixed results on 1970’s First Step, Disc 1 of this five-CD box, encompassing the lineup’s four albums plus a disc of singles and B-sides. Things can get cacophonous with Lane’s bass carrying the melody while McLagan’s B-3 and a couple of Wood’s guitars simultaneously solo. And this being the age of panning for its own sake, be advised that listening through headphones, with Woody’s slide veering left and right on “Around The Plynth,” might cause brain damage, or at least vertigo.

Lane’s soulful ballad “Devotion,” showcasing Bobby Womack’s influence on Wood, is more successful, as is “Flying,” which anticipates Stewart’s later hits. Eclecticism was the order of the day, so some Appalachian banjo (by Stewart) on “Stone,” with Wood on harmonica and Lane on acoustic and vocal, not only works, it fits.

Long Player dispenses with the psychedelic studio tricks and presents the band for the great riff-and-hook machine it was, on originals like “Bad ’N’ Ruin” and “Had Me A Real Good Time.” The inclusion of a live rendition of McCartney’s “Maybe I’m Amazed,” with Lane handling the opening verse before Stewart takes over, is a treat. Big Bill Broonzy’s “I Feel So Good,” however, is just plain sloppy. But with Stewart’s voice, McLagan’s gospel organ, and Wood playing economically, Lane’s soul tune “Tell Everyone” is worthy of Percy Sledge or Joe Tex.

With A Wink Is As Good As A Nod… To A Blind Horse and the band’s ’73 swan song, Ooh La La, Faces hit their stride, with the hits “Stay With Me” and “Cindy Incidentally” and favorites “Borstal Boys,” “Debris,” and “Ooh La La,” featuring a rare lead vocal by Wood.

What’s perplexing is the absence of the single “I’m Losing You” from the same period. It’s also a shame that the booklet has no liner notes, just track listings; such a colorful band screams for some historical perspective.