Live albums can be a remedy for contract disputes or a way to stall for time during a creative dry spell. For Susan Tedeschi and Derek Trucks, it’s really the best way to be heard on a recording. Live is their natural habitat. When they’re feeding off each other and the raw energy of an audience, good art happens. 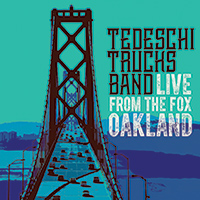 Live From The Fox Oakland is not only a live album; it’s a document of the band’s ascendency as a highly skilled ensemble. The venue in Oakland allows their music to undulate, flow, escalate, and transition. Dynamics, musicality, and immediacy collide with humanity in a warm blend of groove and tasteful improvisation.

On the 10 minute and 51 seconds of Derek and the Dominoes’ “Keep On Growing,” Trucks’ slide guitar takes the discipline to new heights of spiritual improvisation. And this is what the Tedeschi Trucks Band is about.

Recorded on one night on September 9, 2016, this live show at Oakland’s Fox Theater showcases the band playing 15 strong originals and cover tunes. Tedeschi is in full gospel mode with an eerie vocal resemblance to Bonnie Raitt on Leonard Cohen’s “Bird On The Wire.”

With liner notes by David Fricke and mixed in full 5.1 surround sound using a vintage Neve console, the album is available in multiple formats including vinyl, DVD, and Blu-ray.

Derek and Susan make George Harrison’s “Within You, Without You” their own, while Bobby “Blue” Bland’s “I Pity The Fool” gets the royal treatment complete with a stellar horn section. They’ve got Tim Lefebvre on bass, Tyler Greenwell and J.J. Johnson on drums, and Kofi Burbridge on keys and flute.

The ensemble really kills on Miles Davis’ “Ali,” and a highlight is “I Want More,” which quotes Santana’s “Soul Sacrifice” during the outro. The band nails the flavor of Jack Johnson-era Miles Davis, or can play with economy and restraint for less-complex compositions. Tedeschi holds her own on guitar, playing with taste and solid expression, while Trucks is undoubtedly the star soloist placing just ahead of Tedeschi’s deep, powerful rasp on the mic.

The three-four time of “Let Me Get By” is Exhibit A on how the band has evolved, averaging 200 dates a year on the road melding blues, gospel, jazz, and echoes of the Allman Brothers. If you like soulful music with the spirit of adventure found in jazz and gospel music, get this.

Kurt Rosenwinkel – The Enemies of Energy