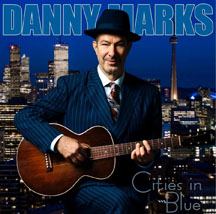 John Lennon once said that, with the exception of Chuck Berry’s “Rock And Roll Music,” songs about rock and roll are never successful. And it’s hard to write a song about the blues and its heroes without it coming off maudlin or trite.

Cities In Blue is a Canadian TV series about the blues, concentrating on origins and the people who carry it on. So writing a song about each destination (Memphis, Kansas City, Chicago, New Orleans, etc.), one has to walk a fine line between being true to the city’s style and coming off like the blues equivalent of Schoolhouse Rock! But if anyone could pull it off, fortunately, it’s the show’s host, Toronto’s Danny Marks.

On Marks’ previous albums, he’s taken on blues, surf, reggae, rock, country, and a tribute to Toronto’s R&B scene. Here, it’s all blues, but Marks’ facility with its many shades is impressive. He honors T-Bone Walker one minute, mixes Steve Cropper and B.B. King the next, with Muddy Waters, some tasty slide over a Piedmont groove, and even a loungey, reverbed instrumental along the way.

As much as Marks’ talent, what makes this succeed is his dedication – to the blues, to the guitar, to music, period.