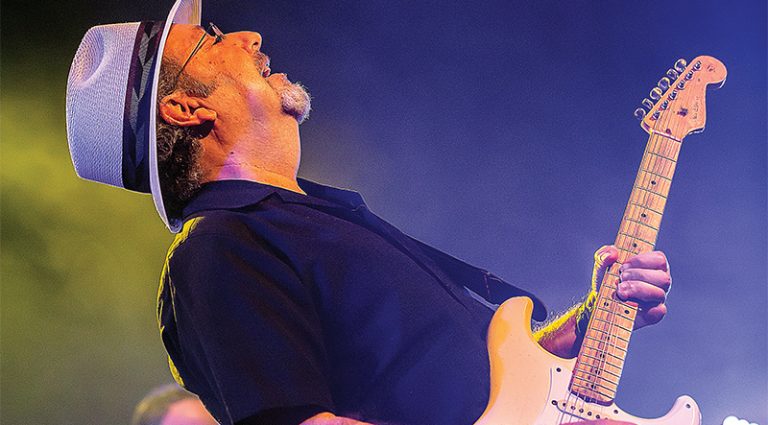 Tom Principato’s 18th album, Live and Still Kickin’! portrays the energy of its title and was recorded on two continents.

A follow-up to Live & Kickin’ (from 1999), the majority of it was recorded at the Barns of Wolf Trap, in the cultural center in Vienna, Virginia – a venue Principato chose for its intimacy, acoustics, and proximity to his hometown fans. The album features Principato’s band with a horn section, save for the last three songs, which were recorded in France, one of several performances filmed during a tour of Europe.

“The band I usually perform with is a five-piece: Joe Wells on drums, Steve Wolf or Matt Everhart on bass, Josh Howell, an outstanding percussionist who also doubles on electric harmonica and vocals, and Tommy Lepson, a great vocalist and keyboard player,” he detailed. “Since we had quite a few horn arrangements from past recordings by Chris Watling, we decided to include horns for the filming at Wolf Trap.”

Because travel expenses figure into his European performances, he has at times used European musicians as his backing band; the recorded stops in France are exemplary, and he noted that they were pleased enough with the performance and the recordings that they decided to include a few songs from that concert.

Due to his musical associations with late superpickers Roy Buchanan and Danny Gatton (Principato’s Powerhouse Records has released several archival recordings by both), he is often cast as a Telecaster player. However, there’s no Tele on the new album; rather, he used mostly two Fender Stratocasters.

“I always bring a Tele and a Strat to gigs, even the European tours,” he said. “And I always play both during a typical concert. I really favor the Strat these days, partly because I use the vibrato quite a bit, usually in an understated way rather than dive bombing. If I pick up a Tele, I’ll usually mention Roy or Danny and say something like, ‘It’s time to unleash the chickens!’ Then, I’ll do a segment of songs featuring the Tele. Unfortunately, that portion of the concerts was not included in this DVD.”

Principato purchased the cream-colored Strat new in 1985, and it can been seen and heard on the majority of the new live release.

“I’ve played the heck out of it for all these years,” the guitarist said. “It’s got an alder body with a maple neck, and I installed Seymour Duncan pickups soon after I bought it.”

The black Strat shown in the French segment is a Mexican-made guitar tuned to Open E. Principato favors a Dunlop #218 Pyrex/glass slide.

The songs and arrangements on Live and Still Kickin’ are diverse, and include a disproportionate amount of Latin influences.

“My repertoire has always been an eclectic mix of roots styles,” Principato reflected. “Blues, rock and roll, R&B, New Orleans funk, Latin – including a tango – and some jazzy stuff, too. The syncopation of the congas adds so much to all of those styles.”

Exemplifying the Latin influence on Still Live and Kickin’ is a rendition of “Crosscut Saw” that includes a staccato/rat-a-tat horn arrangement.

Principato is very satisfied with the overall presentation of the new album, and plans to continue his craft.

“I don’t travel that much in the U.S. anymore,” he said. “I really wanted to show everyone outside of our area what we had to offer in terms of a first-rate group of musicians and a varied selection of original roots music. I’m very pleased with the results and I hope this DVD will win us some new fans. I’m in pretty good shape, physically, so I’d like to perform live as long as possible. Traveling and touring is a lot more taxing than performing.”