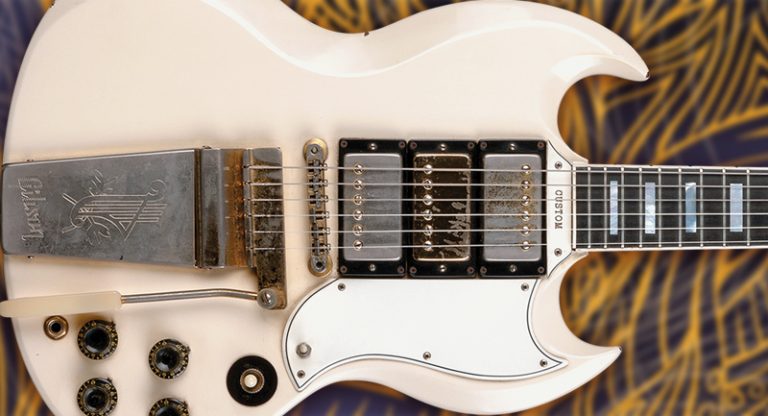 In 1961, Gibson introduced the double-cutaway Les Paul to replace the original version, which had been endorsed by guitarist Les Paul since being developed in 1952. Redesigned in response to falling market demand in the face of competition from Fender’s lighter, curvier, more-contoured Stratocaster, the guitar was re-named SG (for “solid guitar”) during the 1963 model year; part of the confusion over when exactly the name was changed revolves around the fact Gibson continued to use truss-rod covers engraved with Les Paul’s signature until the supply was gone.

The new design was greeted with mixed reaction. While the guitar sold reasonably well – Gibson says the Les Paul SG sold more than 6,000 units, compared to the total of 1,700 single-cuts sold from 1958 to ’60. But, as session guitarist, guitar historian, and former Gibson designer/clinician Mitch Holder recalled, “Les never liked the new design and joked about how people could injure themselves on the horn-like cutaways!”

When Gibson’s contract with Paul ended in ’62, he was in the process of divorcing Mary Ford, so beyond Paul’s dislike for the new model, Holder added, “He didn’t need any extra income on the table.”

Like the original “Black Beauty” Les Paul Custom, the SG Custom was given lower/smoother frets and marketed as the “Fretless Wonder.”

This SG Custom resides at the Hard Rock Cafe’s home-base “Vault” in Orlando. Once played by Rolling Stones co-founder Keith Richards, it bears the requisite Custom specs – 24¾″ scale, mahogany body and neck, bound ebony fingerboard, pearloid block inlays beginning at the first fret, triple-bound headstock, split-diamond peghead inlay, and pearloid Gibson logo. It sports gold-plated hardware and its three humbucking pickups bear early patent numbers and are controlled by the familiar two Volume/two Tone knob arrangement. Other appointments include a three-way toggle switch mounted to the pickguard, a Tune-O-Matic bridge, and a Maestro Vibrola with a lyre and logo on its cover plate.

Grabbing his calipers, Hard Rock guitar tech Kip Elder measured its nut width at 1.67″ and its thickness at .800″ at the first fret (dramatically narrower than the single-cut Les Paul once owned by Mick Taylor that also resides in the HRC Vault), graduating to .094″ at the 12th fret.

Elder also noted that the pickguard-mounted toggle switch acts as a phase switch – a mod confirmed by Andy Babiuk, author of the definitive Rolling Stones Gear, who said the toggle “has something to do with the third pickup.”

“In 1972 I doubt if Keith had a series/parallel thing going on,” noted HRC curator Jeff Nolan. Whatever its cryptic purpose ,the mod is unimportant to the guitar’s history in the hands of “Keef.”

“It’s cool because he used it for a brief time in ’73, including on the Exile on Main Street tour,” Babiuk said. “He also used it at the L.A. Forum benefit show to aid survivors of an earthquake in Nicaragua, and during the subsequent Pacific tour, particularly on ‘Midnight Rambler,’ which he played in standard tuning with a capo on the seventh fret.”

The Hard Rock acquired it from Marshall Chess, a music and film producer who in 1970 was hired by the Stones to run the band’s new label, Rolling Stones Records; he’d been acquainted with the band since they recorded a few songs at Chicago-based Chess Records – the label founded by Marshall’s father, Leonard, and his uncle, Phil – in the midst of a U.S. tour in ’64. He stayed with the band’s organization until ’77.

Wide-eyed in wonder, seven-year-old Kip Elder was enrapt by the array of knobs on the bass played by Stuart “Woody” Wood as he watched the “Bay City Rollers Show” one Saturday morning in 1979.

Though the childrens’ program – which included lip-synched performances by the band as well as skits wherein they interacted with the life-sized puppet/characters borrowed from producers Sid and Marty Krofft’s “H.R. Pufnstuf” – was as short-lived as the Rollers’ popularity in the U.S., Elder’s fascination never died, and today manifests as a passion for vintage guitars and basses he puts to use running a custom-guitar shop and in his job as guitar tech at the Hard Rock Cafe’s home “Vault” in Orlando.

“I’ve always been very visually oriented, and as a kid I’d get excited by shapes and colors,” Elder laughingly recalled of his formative youth. “I vividly remember how cool the Rollers looked on TV – especially Woody’s custom-made White Knight bass!”

An “embassy kid,” Elder is the son of a government official and found his first “good” guitar – a $150 Japanese-made Sanox – in Athens, Greece. “It was a Candy Apple Red Strat copy with a maple neck and a white pickguard,” he chuckled.

He also fondly recalls early jams with buddies in junior high, including a “gig” where they played Twisted Sister songs in their embassy-school cafeteria. When the family was later stationed in Virginia, Elder stoked his rock jones by building guitars because he couldn’t afford the instruments he really wanted.

“In high school, I’d get beater parts, necks, and unfinished bodies, and build in our garage. I’d paint them using spray cans. Back then, in the mid/late ’80s, the hot style was airbrushed guitars with graphics and naked girls and so on, so I was all about Charvels, Jacksons, and Kramers. I remember buying a Chandler neck with a black headstock – it looked just like a Jackson – and I assembled a guitar around it.

“The coolest instrument – and the real beginnings of my shop – was a Lake Placid Blue copy of a Strat. I painted the neck and fretboard, made faux binding, primered it, and taped it out. It was pretty cool – all Warmoth and Fender parts.”

After realizing that his dreams of making a living as a rock guitarist may not be realistic, he turned his focus to building. By 2007, he was marketing the pro-level instruments like those that make up his current line.

Circa 2002, he met Jeff Nolan, a docent at the Hard Rock Vault. Having studied guitar repair with the late Chris Lukasik and working in the field for years, one day Nolan approached him to work on his personal instruments. That led to the HRC tech gig.

“Now, I’m an aesthetician,” he said. “My job is preserving the aesthetic value of the guitars at HRC, because few will be played again. But they have to look cool because they’re display pieces. That doesn’t mean I don’t set them up for playing; I adjust truss rods, dress frets, and set actions and so forth. And, I’ve put many a headstock back together, put the necks back on a few, and have cleaned a lot of fajita grease off guitars – literally! Hence the title ‘aesthetician.’”

“Every guitar Kip has touched has come back a better instrument all-around, and not just in terms of looks,” Nolan said. “We trust him with our most iconic instruments.”

“One of those was Scotty Moore’s Gibson Super 400 that Elvis played on his comeback special,” Nolan said. “At the time, Jeff Beck was playing the Hard Rock in Orlando, and, knowing he was a Scotty Moore freak, I took it to the sound check. He flipped out. And that guitar was fresh from Kip’s bench.”

“For that occasion, Kip made sure six or eight guitars were set so the celebrity players could hang out and jam.

“We’re the custodians of these instruments and, whether they’re played or not, we have a responsibility to maintain their overall integrity. Kip is a big part of that. We’re not going to display an instrument that isn’t perfect in every way… well, except for Kurt Cobain’s black Strat that is artistically displayed in arrayed pieces in a shadow box in Boston’s Hard Rock Cafe (laughs)! That guitar was destroyed by Dave Grohl in a concert-closing frenzy at the Reading Festival in 1992.”

Other cool instruments to which Elder has lent his expertise include Mountain bassist/producer Felix Pappalardi’s Gibson EB-1. “The headstock had been broken numerous times and repainted trying to hide the damage,” Elder said.

Perhaps more important was Tony Iommi’s iconic Monkey, “On which heavy metal was virtually invented,” Nolan opined. “It’s a ’65 Gibson SG Special with John Birch re-wrapped P-90s. In the bridge position, one was fitted into a metal case by Birch and the neck pickup is a Birch custom P-90. The fingerboard is finished with clear polyurethane.

“Some don’t realize that those Black Sabbath riffs were recorded on P-90s,” Nolan added. “That midrange sound was so cool.”

Elder also fine-tuned a custom Washburn that belonged to Dimebag Darrell, and tweaked the famous John Veleno original built for Marc Bolan, on which Veleno’s engraver misspelled Bolan’s first name as “Mark.” Word has it Veleno was perturbed. He also set up a guitar for Eric Johnson, replacing a reversed nut, and set up the black Gibson Flying V played by Jimi Hendrix at the Isle of Wight concert.

“When the Experience Hendrix Tour played our Hard Rock Live venue, we decided to take a couple of Hendrix guitars and showcase them in the green room, which was great because Eric Johnson, Dweezil Zappa, Jonny Lang, Kenny Wayne Shepherd, Eric Gales, Brad Whitford, Bootsy Collins, and Billy Cox all got to enjoy those guitars up-close. Billy was onstage with Jimi at Isle of Wight, so he really loved seeing it.” – Jim Carlton