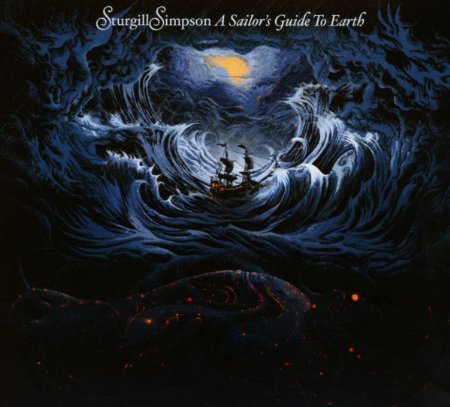 Parental advisory: this ain’t no country album. Rather, Sturgill Simpson – hailed far and wide as the (latest) savior of that good ol’ Nashville sound – is back with his third disc, and it sounds straight out of Memphis.

From the start, Simpson warned one and all that he wasn’t about to be pigeon-holed as your typical country singer. And his recent tour behind the stellar 2014 Metamodern Sounds in Country Music included plenty of rocking jams, Otis Redding and T. Rex covers, electronica freakouts, and even Theramin solos.

This new album is also even more personal than his first two – which is in itself quite a feat. The song cycle is written like a letter to Simpson’s newborn son, providing a welcome and a warning to learn from his daddy’s mistakes.

And at the same time, the album’s also more autobiographical: Simpson lists those mistakes and doesn’t mince words. Songs like “Sea Stories” (the closest thing to a “country” tune here) and the romping “Keep It Between The Lines” are straight-to-the-heart cautionary tales.

Simpson also covers Nirvana’s “In Bloom.” He remembers that Nevermind hit when he was in seventh or eighth grade, going off like a bomb in his bedroom. He says the song summed up what it means to be a teenager, telling a boy he can be sensitive and compassionate and doesn’t have to be tough or cold to be a man. Once again, a message passed on from father to son to prepare for those teen angst years.

Throughout, there’s hard-stomping guitar thanks to Simpson’s sideman Laur Joamets and his wicked Telecaster. Among the standouts are L’il Joe’s slide work on the heavy-bottomed “Brace For Impact (Live A Little)” and his powerful riffs throughout “Call To Arms.” But in truth, he shines on every track.

Country, R&B, or rock? Ultimately, who cares what label goes on it. This album’s an instant classic.

Danny Caron – How Sweet It Is