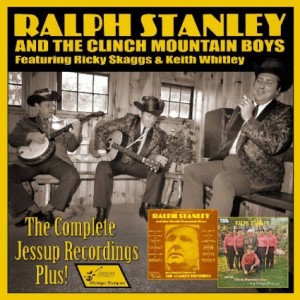 Formed in 1946, the Stanley Brothers were the second bluegrass group, following Bill Monroe’s. But lead singer and rhythm guitarist Carter Stanley died in 1966 at age 41. Banjo-playing brother Ralph formed the Clinch Mountain Boys, and is still going strong at 89.

In 1970, he was introduced to two teens who’d patterned their brand of bluegrass after the Stanleys – 16-year-old Ricky Skaggs and Keith Whitley, a year younger. The following year, the pair recorded a tribute album to the Stanley Brothers, backed by the Clinch Mountain Boys, and became members of the band. That album and two others, Michigan Bluegrass and 1973’s Gospel Echoes Of The Stanley Brothers, comprise this two-CD set.

Reports vary regarding how much Stanley participated on the tribute album; some say the group’s guitarist Roy Lee Centers handled most banjo parts. If so, that’s impressive, because Centers’ guitar leads are facile and deep-toned, as on “Rock Bottom” and “Leaning On Jesus.” That Skaggs’ mandolin playing is dazzling and authentic is no surprise; he was sitting in with Flatt and Scruggs as well as Bill Monroe before he’d turned eight.

He and Whitley uncannily capture the Stanley Brothers’ harmonies. Both went on to mainstream Nashville success, but Whitley drank himself to death at 33. Skaggs remains one of bluegrass’ leading lights.