Comparisons between Blackberry Smoke and earlier Southern-rock bands may be inevitable, but the Atlanta-based quintet takes such observations in stride.

“That’s way better than being compared to the Bay City Rollers,” wisecracked vocalist/guitarist Charlie Starr, who recently went on the record with VG along with bassist Richard Turner. “The musical freedom those bands enjoyed is very inspiring. They definitely took it and ran with it. We are most definitely influenced by what they did, but also by what inspired them.”

“Calling us a rock band or a country band or a funk band or what have you, is sort of selling us short, because we are all of those things and more,” added Turner. “The beauty of being the bassist in a band from the beginning is (that) I can play a funk lick in a bluegrass song while wearing a Slayer shirt, and no one looks sideways at me. It sounds natural, because it is.”

The band has honed its reputation for slightly over a decade by opening for many classic Southern rock bands, and BBS even played at George Jones’s 80th birthday party. Their most recent effort is The Whippoorwill, released last August. It followed a live DVD released earlier in the year.

“In one of our ‘grand scheme’ sessions, we decided early on to plateau as soon as possible – you know, go ahead and put that behind us,” Turner recounted.

“We actually filmed the show at the Georgia Theater for the DVD the day after we finished tracking The Whippoorwill,” Starr noted. “It was an exhausting undertaking, to say the least.”

Among the producers of The Whippoorwill is Zac Brown, who met the band on a Lynyrd Skynyrd cruise. Their ongoing friendship and musical respect resulted in the band being signed to Brown’s Southern Ground Artists label.

The 13 tracks showcase the band’s earnest and full-tilt commitment to finely-crafted music, and Starr and Turner credit its sound to having been able to concentrate on recording sessions, even if they were limited in number.

“Clay Cook, of the Zac Brown Band, says it sounds more like us than anything we’ve previously done,” Starr enthused. “Our other albums were recorded in spurts, so to speak, which can really be frustrating. We’d never been able to block out more than a couple of days at a time to record. This time we had four and a half days, which seemed like an eternity. These sessions flowed like they should, I guess. Everyone was very focused, and I think we nailed it.”

“We had previously been forced to record a song or two here, play for a few months, maybe mix a song or two, and maybe record another song or two here and there,” Turner remembered. “Never the same studio twice. This record was almost the ‘sweet spot’ for me personally.”

Starr employed a plethora of guitars on the album.

“I used a 1956 Les Paul Junior, a ’59 Les Paul Special, a custom-built Tele-style with a P-90 in the bridge and a Danelectro lipstick-tube pickup in the neck, a Dan Armstrong, a Fender Tele with a B-bender, a National Estralita resonator, a Gibson Hummingbird, and a Martin 0000-HD28,” the guitarist said. “In concert, I use pretty much the same instruments but I also have a bastardized SG Junior created from a single-pickup SG I and painted gold in my garage.” 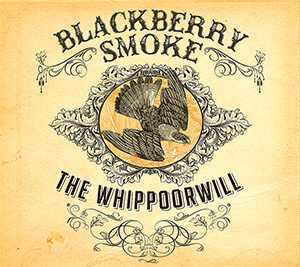 On the other hand, Turner used a vintage Fender Jazz bass borrowed from producer Matt Mangano, but recently acquired another bass he plays live.

“I had Joe Hamilton build a P/J-style bass, and I cannot put it down,” he said. “I basically play one bass at a show, unless a failure occurs, and lately, I only play the Joe Hamilton.”

The Whippoorwill has its share of sonically intriguing passages. The intro to “One Horse Town” has some (admittedly contradictory) low-volume feedback, during which Starr’s Hummingbird kicks in with a tough acoustic riff.

“Tonal high jinx make the world go around,” Turner explained. “Zeppelin used to drop the bomb; we can, too. And anything that makes folks reach for the Volume knob twice – once to turn it up and real quick to turn it down when the volume hits – is fun.”

Starr played a pedal steel on more than one track, and banjo on “Leave A Scar”; it and a Skynyrd-like whistle underline comparisons.

“The steel is an old Fender three-pedal/two-lever thing that belongs to Richard,” Starr said. “Much to the chagrin of pedal-steel players everywhere, I’m just a guitar player who’s infatuated with their instrument. I only use E9 tuning. The banjo was a Deering; the same fingerpicks and thumbpicks were used on both.”

BBS also references Led Zeppelin on songs like “Crimson Moon” with its hard-hitting note-for-note guitar and bass riffs. “Several solos on the record were live as we tracked,” said Starr. “That one, however, was overdubbed. I played it through a real-deal Marshall offset JTM-45 that belongs to the studio. I tried to take that amp home with me, but couldn’t fit it under my coat!”

Blackberry Smoke is justifiably proud of The Whippoorwill, and they relish the opportunity to get it right.

“It’s pretty powerful,” Turner summarized. “If we’d had a month and a half to play with textures and instrumentation, we would have scored an Exile On Main Street. We’ve proven we can string a year’s worth of single recordings into a full-length CD.”

This article originally appeared in VG‘s February 2013 issue. All copyrights are by the author and Vintage Guitar magazine. Unauthorized replication or use is strictly prohibited.