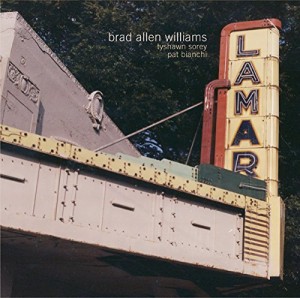 Brad Allen Williams is a fine guitarist who has served the last few years as a sideman to numerous artists, most notably José James. Fans of his work with other folks might be surprised at this straightahead organ trio record that was cut live in studio and features Williams, Pat Bianchi on organ, and Tyshawn Sorey on drums.

Things start swinging with a fun version of Joe Jackson’s pop hit “Steppin’ Out,” and Williams lets you know right away he’s got the chops and soul.

There are a couple other pop covers, one that works great and one that doesn’t. “Galveston” basically just uses the familiar melody, but nothing much happens. Then Williams dons an electric sitar for “Betcha By Golly Wow” that stays close to the original, but has a great vibe.

Williams’ original bopper “Euclid And Lamar” is a showcase for the band’s jazz chops.

“Stairway To The Stars” is a highlight of the record, a lovely ballad with both Williams and Bianchi shining on solos. Williams handles “More Than You Know” by himself and it’s a perfect closer, lovely and understated.

Given this record and his work as a sideman in various styles, the future looks bright for Williams.