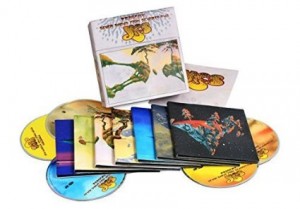 The term “holy grail” is overused these days, but stop the presses anyway – this is the holy grail of Yes concert records. Composed of live tapes from the fall of ’72 and lost for decades, Progeny offers seven complete Yes shows from the North American tour, all featuring the classic lineup of Jon Anderson, Steve Howe, Rick Wakeman, Chris Squire, and then-new drummer, Alan White.

What makes this collection such a big deal? For one thing, this is the original source material for Yessongs, the band’s hit triple-LP from 1973. In retrospect, that album was poorly mastered and heavily edited, while these recordings are presented in stunning high-resolution audio. It’s an audiophile’s dream come true, plus it arrives with wonderfully detailed liner notes.

Better yet, by presenting seven full shows, it’s almost like you’re on tour with the band, following them from city to city. Every gig has its merits, but the Canadian shows are standouts – in particular, the Halloween show in Toronto may be the greatest single live recording in Yes history.

The prog quintet roars through fresh material like “Close To The Edge,” “Siberian Khatru,” and “And You & I” with brash virtuosity and an uncanny melodic approach.

You can also witness the anomalies between dates: Anderson has the flu in Ottawa, while Wakeman’s synths, organ, and Mellotron crap out here and there, typical of the era. Conversely, for the first time, you’ll hear licks that were buried on the old records, plus onstage jams and improvisation ideas that were lost to history. There are revelations all over the place.

Guitar hero Howe – then just all of 25 years old – plays like a demon at each stop, shredding on his ’64 Gibson ES-175 before switching to his Fender steel (dig the heavy Echoplex!), or whipping out a classical for “Mood For A Day” and a Martin D-18 for “Clap.” No question, Howe raised the bar for ’70s rock guitarists and he proved it all over this leg of the tour.

Another cool tweak is that the producers re-amped Squire’s bass tracks and turned them into low-end Rickenbacker heaven – listen to his massive riffs on “Roundabout.” Rock bass was never the same again.

If you just want a taste of Progeny, you can buy a two-CD highlights set, but for the full effect, check out the full 14-CD box. It is indeed the holy grail of Yes live recordings and a huge treat for prog-rock fans.