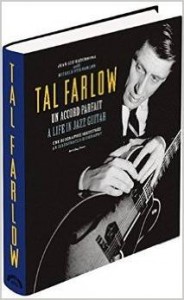 Maybe it’s sour grapes, but it sometimes seems jazz guitarists – in comparison with pianists and horn players – never get the recognition they’re due among the music’s diehard cognoscenti. On the other hand, few guitarists of any stripe receive the kind of tribute accorded to Tal Farlow in this staggering new book.

The tribute comes thanks to Parisian jazz fan Jean-Luc Katchoura, who worked with Farlow’s widow Michele Hyk-Farlow in compiling the story and copious illustrations. The book is the first title published by the world-renowned jazz mecca, Paris Jazz Corner.

Where to begin? Quite simply by saying this is a masterpiece, period.

The book chronicles Farlow’s life from his birth in Greensboro, North Carolina, to his death at age 77 in 1998. Inspired by Django Reinhardt and Charlie Christian, Farlow’s music ultimately took form under the influence of Art Tatum, Charlie Parker, Dizzy Gillespie, and others. The book tells of his years as one of the premier bop guitarists, as well as his sign painting and art. With his wife helping out, Katchoura’s text (in both English and French) is ripe with insights others may never have garnered.

The biography gives way to a detailed discography as only jazz buffs – especially, French jazz buffs – know how. Not only does it chronicle the usual American releases, but also worldwide pressings, including the fine period cover art.

It’s the art, photos, and illustrations throughout that really set this book apart. A hefty, oversize hardcover of 344 pages, it includes more than 400 images, 150 of which have never before been seen. The photos set the scene, including concert posters, ads, programs, and family snapshots from Farlow’s early days with Red Norvo to the 52nd Street bebop clubs of the early ’50s to recording sessions up until the end. The image collection is without par.

In the center of the book is a selection of photos of some Farlow’s personal guitars. Included here is Farlow’s early Gibson ES-250, first prototype Tal Farlow model with three pickups, and two other production Tals that he owned and played.

Also included is his red-painted ES-140, which was a true oddball – and one with a fascinating story. Set to play with the Red Norvo Trio on one of the first TV shows to be transmitted in color, the producers asked Tal to pick a red guitar. He refused to paint his own guitar red, but the TV people called Gibson who seized the moment, painted a diminutive ES-140, and shipped it to Farlow for the show.