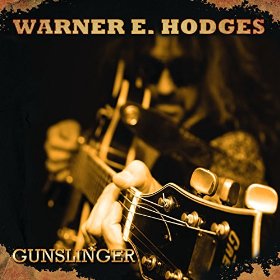 Fans of no-frills rock and roll and guitar playing will be thrilled with this new outing from Warner Hodges, the lead guitarist in Jason and the Scorchers. With the help of his bandmates in another project, the Bluefields, Dan Baird, Brad Pemberton, and Joe Blanton, Hodges has put together an album that hits you hard with each tune.

The title cut is a slice of loud, funky rock and roll with a solo that literally explodes out of the speakers. “The Hard Way” is AC/DC through a Southern rock filter. “Back In Town” is a stomper with open-string hammer-ons and pull-offs that features an imaginative solo with a lot of chromatic movement.

To prove you can be melodic while playing this kind of raucous rock, “Backwater Girl” features a gorgeous solo with great bends and killer runs.

Hodges rough-and-tumble voice matches the music and lyrics here perfectly. This one may make some folks nostalgic about the way rock used to sound. It should also make them hopeful about its future.