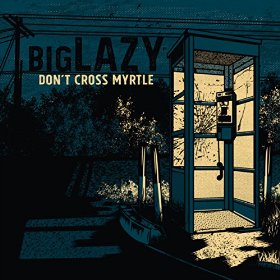 The guitar universe has been inundated with all things “retro” for the past decade, but the all-instrumental trio Big Lazy gives it a fresh spin. Old-school twang meets gritty Hollywood-soundtrack music here, with guitarist Stephen Ulrich offering a slow, drawling style and fat vintage tones.

A jazz-trained player with side roots in blues, country and western, ’50s sci-fi, and early rock, Ulrich paints vivid soundscapes, as on the opener “Minor Problem.” He mixes reverby chords with sweet lap steel, conjuring up a seedy night in the tropics without using any words.

“Unswerving” drapes brooding slide licks over accordion and a hip-hop drumbeat – think of a cop-gone-bad movie starring Robert Mitchum or Kirk Douglas as the conflicted anti-hero. Ulrich gets his Dick Dale on in “Human Sacrifice,” cranking up the ’verb and overdrive to create edgy surf rock with bowed acoustic bass. In fact, every Big Lazy song seems to be its own movie soundtrack.

Ultimately, Ulrich’s blend of mid-century Americana, cinematic sweep, and a dash of the experimental is exciting and refreshing. In fact, this is some of the most titillating guitarmanship we’ve heard in a while.