Home Music Ralph Stanley, II – This One is II 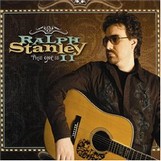 The expression “born into the business” applies to Ralph Stanley II. The son of Ralph Stanley and a nephew of Carter Stanley, “Two” as he’s often called when in his father’s presence, is the direct inheritor of a monumental body of American musical tradition. Having spent nearly 15 years as the lead singer in his father’s band, Stanley has had ample opportunity to soak up the subtleties of his father’s unique and pioneering form of mountain music.

This is Stanley’s fifth solo release, and instead of remaking country standards, here he applies his traditional approach to contemporary tunes by Lyle Lovett, Elton John, Fred Eaglesmith, J.P. Pennington, Townes Van Zandt, and other modern songwriters. And Stanley’s versions don’t sound radically changed from the originals, even if the nuanced changes do remarkable things; Lovett’s “LA County” retains its tempo, but fiddle and banjo vamps replace the synthesizer in Lovett’s, instantly setting the song back 50 years.

Stanley can deliver a song with an emotional impact that eludes many euphonic and more radio-friendly vocalists. Like Willie Nelson, he doesn’t do much when he sings, but his delivery connects with the song in ways fancier voices usually don’t. Accompanying musicians take their musical cues from these simple vocals. Hot pickers including Cody Kilby on guitar, Randy Kohrs on dobro, and Adam Steffey on mandolin all play with noteable restraint. Every solo emphasizes the tune’s melody and rhythmic skeleton rather than going into uncharted waters.

Some solo albums showcase how far from their usual material an artist can get. This One is II takes a very different path as Stanley interprets modern material in an