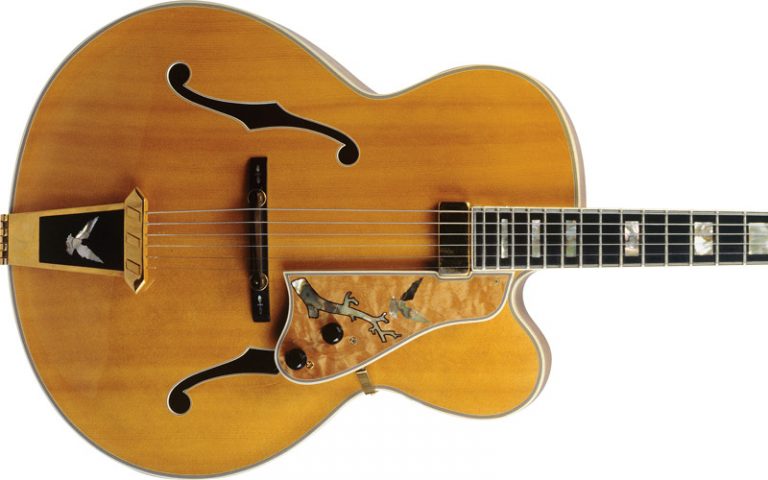 In 1978, Gibson craftsman Wilbur Fuller produced the company’s first hand-carved, tuned-by-ear custom guitar. The instrument, which in a blind sound-off with some of the best instruments of its era, won the hearts of Gibson brass, ultimately became the Kalamazoo Award.

Gruhn’s Guide to Vintage Guitars tells us that the Kalamazoo Award was a 17″ full-depth archtop with a rounded cutaway and solid carved top, solid maple sides, and carved maple back. Adding to its magnificence were an ebony bridge with pearl inlays, wood pickguard with abalone inlay, multi-bound top and back, bound f-holes, bound ebony fingerboard with abalone block inlays, multi-bound peghead with inlay matching the pickguard, and gold-plated hardware.

But all that aside, Fuller says the reason for the Award was his dream to build a guitar that drew its tone from a top, back, and braces that were all finely tuned – by his ear alone!

“I had studied and talked with the old craftsmen, and dreamed of the day I could experiment with a lightweight, tuned, carved guitar,” said Fuller, who worked for Gibson from 1954 until he retired on the last day of 1980. “I watched them tune tops and backs for the Citation (a similarly fancy archtop made by Gibson in 1969-’70 and again from ’79 to ’83), and it was very intriguing. The tops were tuned to C, the backs to D.

“To me, this didn’t go far enough. I decided that each brace, after being glued in place, should be tuned to a separate pitch, and the back tuned to one of these. I felt taking away a lot of wood would improve the tone, and I set the graduation to 7/64″ at the rim, increasing to 10/64″ and 11/64” at the center. This included the cutaway and the head block area.

“So I started building what would become the Kalamazoo Award. I asked Mike Korpac, from production, to get me the parts for a carved instrument. Mike designed the head veneer, tailpiece, and finger rest, while I dished out the top and back next to the binding, then graduated them. I braced the top and tuned the bass brace to C and the treble brace to D. I also tuned the back to D, to match the treble brace.

“Taking wood off of the brace lowers the pitch, and sanding the crown out of the back produces the same effect. The old craftsmen talked about tuning tops and backs, but that was all they had. They were not braced, and neither was the body. Little did they know that when the top and back were glued to the rim, all pitches changed!

“I built the guitar under pressure. I’d button it together around the sides, then tap on it. If it needed a change, I’d take it apart and carve more wood off. I buttoned the bodies together, with no glue, each time removing wood from the braces until the pitch was perfect. While the body was still buttoned together, the crown in the back could be sanded down until it matched the treble brace. This method of tuning wood remained even after the instrument was strung up.

“I’d use a small rubber mallet or my index finger to tap over each brace at the notch in the f-hole or bridge point. I listened closely with my ear as I tuned these guitars – they were not mechanically tuned.

“When the guitar was finished, it would be in tune. The inspection department couldn’t believe that I could tune by tapping on wood, so they took one of the finished guitars and put it on the strobe tuner. It noted perfectly!”

Though certain specs and accoutrements were borrowed from the Gibson Citation – which preceded and influenced Fuller’s design – the flying bird peghead/pickguard/tailpiece inlay is unique to the Award.

Production of the Award lasted until 1984, and there are about 85 of these precious beauties with Wilbur Fuller’s name and date on the label inside. Their appointments, tone, playability, and scarcity combine to make the Award a very soughtafter instrument; expect to pay upwards of $18,000 if you find one!

“Building the Gibson Kalamazoo Award was my proudest moment at Gibson,” said Fuller.

This article originally appeared in VG‘s Sep. ’02 issue. All copyrights are by the author and Vintage Guitar magazine. Unauthorized replication or use is strictly prohibited.