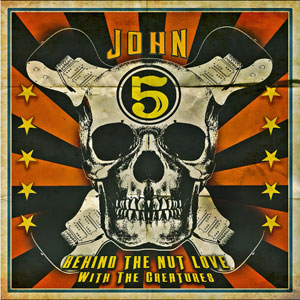 Guitarist John 5 and his bandmates in the Creatures, Ian Ross and Rodger Carter, have slated a tour set to begin in March. They’ve also produced a video for the single, “Behind the Nut Love” which they recorded for the upcoming album Guitars, T!ts, and Monsters. Throughout his career, John 5 has collaborated with Lynyrd Skynyrd, Ricky Martin, and Rod Stewart, and toured with Marilyn Manson and Rob Zombie. He also scored Zombie’s film, The Lords of Salem and has released eight studio albums as a solo artist. To learn more about the video, album, and the tour, go to john-5.com.