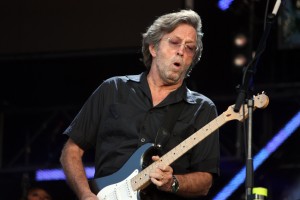 This new DVD featuring the highlights of Clapton’s tour through the Mid and Far East in ’14 offers some great music. But more importantly, it gives a glimpse into facets of the legendary guitarist’s life.

His talk of retirement is the headliner, with his love of Japan not far behind. The way the film is put together gives ample time to examine both with vignettes placed between each song. We hear plenty, not only from Clapton, but band members, and various friends he’s made in his years of touring.

The retirement segments are fascinating. He’s said he wants to quit touring at the age of 70, which is nearing quickly, but a listen to him talking about that here makes you believe it won’t happen. In fact, the DVD ends with him telling the interviewer that if he has a gift from God, then not taking it on the stage might be the wrong thing to do. That, in a contradictory way, bookends with the start of the film that finds him saying he loves rehearsals more than concerts! The reason? He admits he’s resentful of the audiences coming in to listen.

The 16 songs included on the DVD and in the bonus tracks indicate he does just fine with an audience in attendance. For the first time in several tours, he is the only guitarist on stage and his playing is the highlight of every cut. Yes, he does have Paul Carrack and Chris Stainton on keyboards, and their solos are always crisp and on-the-money, but it’s no mistaking who’s the go-to-guy onstage.

A slowed-down “Crossroads” is slinky with a fiery Clapton solo. “I Shot The Sheriff” is the highlight with a guitar-god solo that Bob Marley certainly did not dream of when he first did the song. The tune also highlights the killer rhythm section of drummer Steve Gadd and bassist Nathan East. We get fine electric versions of “Tell The Truth,” “Pretending,” and other gems, mixed with acoustic songs that are mostly classic blues, except for his versions of “Layla” and “Tears In Heaven.”

If Slowhand does plan to retire, it’s easy to see why he chose Japan to tour as the end approaches. His love of the country is made clear in various interview segments on the DVD. And that love is reciprocated by the people who live there, some who he has known for 40 years. Interview segments with the band also reflect the love and respect the players have for him.