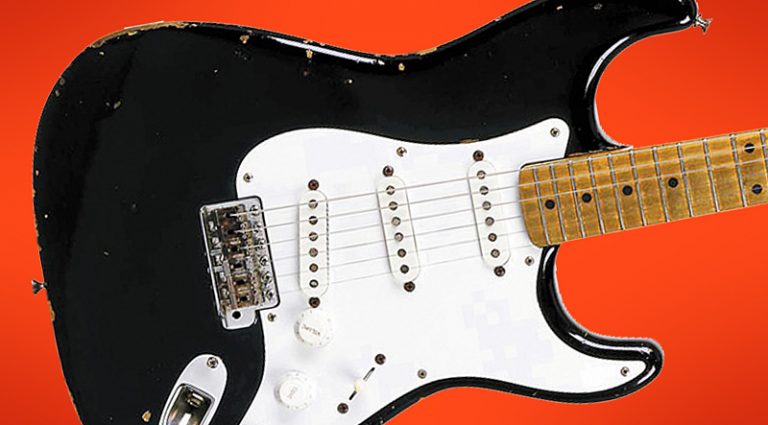 This may well be the most desirable Fender Stratocaster on the face of the planet. And it happens to be a beat-up mongrel assembled from parts taken from three 1950s guitars.

Nevertheless, Eric Clapton’s “Blackie” is one of the most recognized celebrity-associated instruments in the history of the electric guitar, and it served Slowhand’s needs for a decade and a half until its “retirement” in the mid 1980s. Clapton was long ago quoted as saying this instrument “… has become part of me,” so VG elicited some input from two individuals who also got to know the guitar in an intimate manner when it was wielded on a regular basis by the guitar legend.

Lee Dickson has been E.C.’s guitar tech since 1979, and confirmed the chronology that led to the construction of “Blackie.”

“He bought a bunch of Strats in 1970, when they were going for nearly nothing,” Dickson said of Clapton. “He brought them back to England, gave a few to his buddies like Pete Townshend and Steve Winwood, and out of the bunch that was left, he took a ’56 body, a ’57 neck, and the pickups from a third guitar, and made Blackie. He liked the look of the black body, the feel of the neck from one of the other guitars, and the sound of the pickup assembly from another guitar.”

The Strat has been seen and heard on a myriad of albums and tours/performances, and was Clapton’s instrument of choice for his band’s three-song performance at Live Aid. Umpteen memorable riffs and licks, such as the two-chord anchor to Clapton’s cover of J.J. Cale’s “Cocaine” were evoked from this guitar.

Tulsa resident Willie Spears tech’ed for Clapton from 1975 to ’79. Spears can be seen in The Last Waltz, a documentary of the Band’s final performance, as Clapton hands Blackie to him following “Further On Up the Road.”

Spears noted that the Strat was also Clapton’s favorite studio guitar, recalling how he was dispatched by Slowhand to acquire the words to a J.J. Cale song while the Slowhand album was being recorded.

“We saw Cale perform in London,” Spears recounted. “And Eric sent me to get the lyrics to ‘Cocaine.’ We were doing ‘Lay Down Sally’ that night, which sounds like a Cale song. He always had several guitars in the studio, but he always went back to Blackie.”

Note the missing vibrato arm – Clapton doesn’t use a whammy bar, but according to Dickson, “He likes vibrato guitars, but we block the vibrato behind the bridge, and tighten up the (vibrato) springs, so it stays pretty solid.”

The guitar has had an expected history of maintenance and minor repairs. It’s had more than one fret job, pickup adjustments, and at one point Spears removed the three-position pickup toggle switch, then notched it to create a five-position switch. Dickson also replaced a volume pot.

As for the cosmetics, video and photos from the ’70s aver that some of the gouges were already on the body back in that era. Of course, the cigarette burns on the headstock simply add to the instrument’s panache, as would possibly also be the case for a non-celebrity owned pre-CBS Fender.

And soon, Blackie will go up for auction, along with other instruments from Clapton’s collection in a benefit for the Crossroads Centre. The event is a sequel to the June ’99 auction of Clapton memorabila at which another historic Stratocaster, a ’56 sunburst model named “Brownie” fetched $450,000. One can only imagine what the winning bid for Blackie will ultimately be.

And one might also wonder about the thoughts of a guitar tech who was associated with such an important instrument, and perhaps Dickson nailed it.

“My thought when we did the last auction was that at the end of the day, I’m just a caretaker, ya’know? They’re Eric’s guitars; they always have been, and they always will be until he gets rid of them. I take care of them; I may have a few emotional attachments to some of ’em – I love Blackie, I love Brownie… And the Cherry Red ’64 [Gibson] 335 from Cream is a particular favorite of mine. I may have a tear in my eye when I see ’em going. But it’s Eric’s decision, and I totally respect that.”

This article originally appeared in VG‘s June 2004 issue. All copyrights are by the author and Vintage Guitar magazine. Unauthorized replication or use is strictly prohibited.