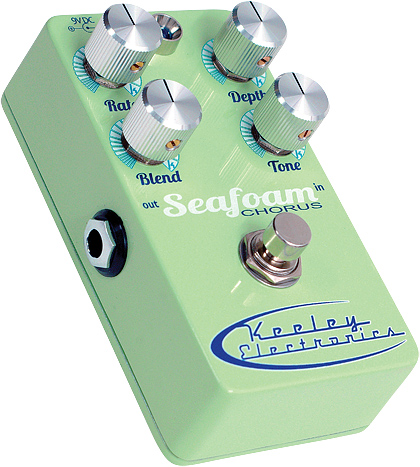 In a world of proliferating effects pedals, discovering one that does what it promises well can be a rewarding discovery. Finding one that does what it promises and rewards experimentation with some unexpected sounds can invoke bliss. Housed in a small-footprint design and resplendently painted in seafoam green (natch), the true-bypass Keeley Electronics Seafoam Chorus is a very versatile effect that can do a lot of things well, from a subtle chorus to shimmering to a heavy warble vibrato.

The Seafoam Chorus also has a pretty straightforward interface with four knobs: Rate, Depth, Blend, and Tone. Rate controls the speed of the effect while Tone varies the overall sound from mellow to a bright shimmer. The Blend control is a unique twist that allows the player to dial in the relationship of vibe to pure chorus. An opto-coupler controls the depth, making for a very smooth and rich dive into the level of effect.

The range of tones the pedal produced using both a Strat and a Les Paul, first through a clean Fender Vibrolux Reverb and then a 50-watt Marshall, was a pleasing revelation. Particularly surprising was the Seafoam’s ability to give the Les Paul some chime through the Marshall when the guitar’s volume control was rolled off slightly. This would be very useful for a Gibson player who wants to produce clean and vibey tones without having to switch guitars.

The Seafoam Chorus treated the Stratocaster even better, helping to thicken up the guitar’s otherwise thin-sounding tone when played on a clean setting. One neat effect unique to the Seafoam Chorus occurred when turning the Blend control all the way down, which provided a sort of split-second time delay. It’s an effect that this reviewer had never heard anywhere else, but it was definitely very cool and mood-invoking.

Used with distortion, the Strat/Marshall combination invoked classic Hendrix and Robin Trower tones with a swirling, Leslie-like chorus to a pitch-shift effect.

A major breakthrough of the digital Seafoam Chorus is the low-noise circuitry that is almost always found in analog chorus units. Even when engaged and coupled to the high-gain Marshall, the Seafoam provided next to zero background noise – a welcome change.

Its small chassis and solid chorus effects alone would make the Keeley Electronic Seafoam Chorus a worthy addition to any chorus-less pedalboard. Consider the additional “side effects” that knob-twiddlers are likely to discover, and the Seafoam is definitely worth diving into.