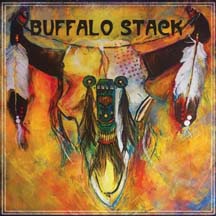 Buffalo Stack is an easy band to like. The ensemble’s debut record is a mix of various styles, including rock, soul, country, and blues. Saying that, though, gives the music short shrift because in some ways it almost seems indefinable.

While the band is a cohesive unit and they are all credited with the writing of the tunes, the leader seems to be guitarist and lead vocalist Andy Stack. His guitar playing is never flashy, but it’s surprising, soulful, and always in the right place. His slide work sits perfectly in the soul/pop/country framework of “Don’t Wait.” His rhythm and lead guitar of “This Time It’s Different” highlights the songs funky rock and roll feel.

Stack is not afraid to make it sound a little dirty, as he shows on the gritty “Anyday, Anytime, Anywhere.” As a vocalist he has an engaging, pure voice that perfectly fits the songs on the record. The influence of Gram Parsons (the only cover on the record is Parsons’ “She”) and Pure Prairie League’s Craig Fuller seems undeniable.

It’s a different time for bands like Buffalo Stack. While the music can’t be categorized for radio, here’s hoping the group will build up a strong enough following to be around a while and make more great music.

This article originally appeared in VG‘s February’15 issue. All copyrights are by the author and Vintage Guitar magazine. Unauthorized replication or use is strictly prohibited.

Carrie Rodriguez – She Ain’t Me