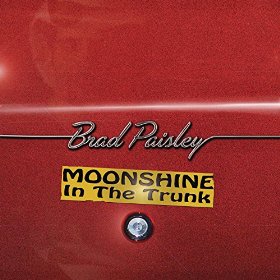 After a slew of excellent albums earlier in the decade, Brad Paisley’s work has taken a more uneven turn. His vocals and flair for guitar pyrotechnics remain flawless even if the material on recent albums has been less-consistent. Moonshine In The Trunk continues this trend.

Several numbers here show him following other male Nashville stars of the moment, grinding out party-hearty anthems about booze, pickup trucks, hot girls in tight jeans, and the other usual suspects. The title song, along with “River Bank,” “Crushin’ It,” “Cover Girl,” “Limes,” and “49WP” all fit the formula.

Three rise above the others: the love ballad “Shattered Glass,” “High Life” (spoofing a lawsuit-happy family), and “Gone Green,” a smart commentary on changing technologies.

His Apollo 11 shout-out “American Flag On The Moon” is earnest, if a bit clichéd. The best instrumental moments come from Paisley, fiddler Justin Williamson, and Randle Currie’s pedal steel.

As for arrangements, too many feel gimmicky – similar to those on other stars’ albums. Two exceptions are the churning rhythms of “River Bank” and stunning instrumental fireworks of “High Life.”

Paisley’s strengths were always rooted in his willingness to stand out from the rest. Here, he’s opted to simply become one of the boys.