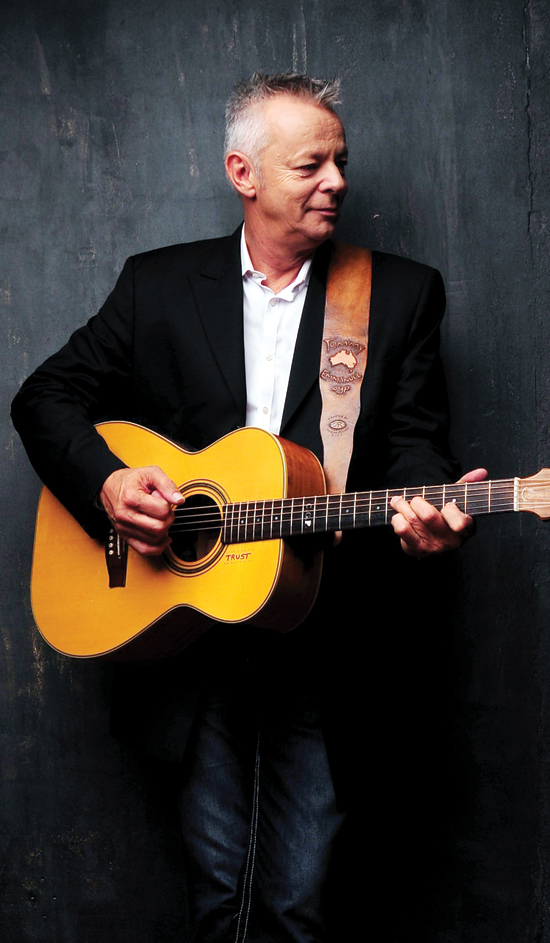 Tommy Emmanuel cautions against using “the V word” – virtuoso – when describing his work.

“I want to make musical statements that stand the test of time,” he said. “I want what I’m doing [to be] more accessible, so I’m mostly interested in singers and songwriters, and want to be influenced by them.”

Emmanuel’s latest recording, The Colonel & the Governor, is a duet with Martin Taylor that reflects those feelings. “We’re both song players. Martin has a way of nailing a melody, and has great swing in his playing. Our playing complements the other, and when I play with Martin, it’s about how much space we leave and when we want to intertwine, we can do that.”

While this is their first recording together, they’ve known each other for some time. And, Emmanuel, no stranger to a duo setting, says playing alongside other guitarists is one of his favorite things. “That’s probably where my strength lies. I love song structure and making an arrangement interesting.”

A true road warrior, he spends much of his time touring solo or with other guitarists. “When I’m home, I say ‘Hi’ to my neighbors, garden, and live a normal suburban life. Then I get on the plane to start another tour!” he laughs. “It’s kind of like my life is disrupted by having to come home instead of the other way around, you know?”

A guitarist who plays in solo or duo situations must have confidence in his equipment, and Emmanuel uses Maton guitars, made in his home country of Australia. His guitar’s pickup/mic system runs into an AER Colorizer that goes into an AER amp, then to the P.A. While the equipment is important, there’s an even more important aspect to his sound. “Having told you all that guitar-geek stuff, the most important element is my sound man, Steve Lowell. He is such an integral part. He does all my effects out front. All I’m looking for is one good sound that I can work with, and if I love it, I’m inspired. I feel like I can have a go at anything.” And while the Maton guitars get most of the road work, he does use others like his 1930 Martin 0-17 with a Seymour Duncan pickup, especially in duo situations.

One might think Emmanuel wouldn’t have time to do other things given his touring schedule, but there are some projects in the cooker.

“I have written a lot of new songs, and after Christmas I’ll be in the studio recording a new solo project. I haven’t done an album where it’s just me for some time now. I also have a new PBS special coming up. I’m just trying to mix it up and do a few different things.”

He also likes to teach, still hosts clinics at various stops, and he’s trying to use his website to help other players. “I’ve got a long way to go with it, but we’re building it up. I’m flying to Florida to film some ideas for teaching. I want to give people a faster way to learn fingerstyle and show them they can use it in song arrangement. It’s tough to let people know, but the bottom line is the reality of it is it’s going to take players a lot of work and you’ve got to be patient and dedicated. You’ve got to eat and sleep music.”

Emmanuel has always applied that philosophy to his own playing. “Yeah, I practice and try to learn things all the time. I play every morning, early. I open my eyes and I can’t wait to get going at it, you know? I’ve always been that way. One of my favorite things right now is going back over old stuff and re-working it to find a better way to do things in the arrangement. I think that’s important. Because we should be evolving as players and we’ve got to always be finding new and interesting ways to do things.”

A major part of that evolution, he adds, is to keep the song in mind. “There are plenty of people who can impress you with their guitar playing. In fact, the world is full of great guitar players. I’m more about the songs and the entertainment.”