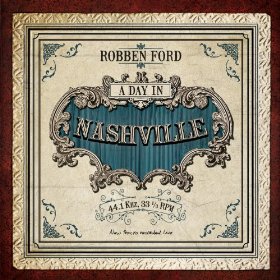 Spontaneity is one of Robben Ford’s earmarks. So, recording nine backing tracks in one day, then adding vocals and ﬁnishing touches a week later (rarely attempted these days) played to his strength.

To say the 62-year-old’s credits are all over the map – from Charlie Musselwhite in ’71, then ricocheting from Joni Mitchell to George Harrison, the Yellowjackets, Miles Davis, kindred spirit Larry Carlton, his group the Blue Line, and even Kiss – is an understatement. But the blues is where Ford is really at home, although not necessarily bound by the idiom.

Whatever the surroundings, he injects a bluesy vibe, in his unaffected vocals and guitar playing, where he’s a true innovator, adding a more sophisticated harmonic sense and chord vocabulary without losing the genre’s essence.

This, his 10th solo project, is one of his best. Superb backing – solid rather than ﬂashy, particularly from drummer Wes Little – is a big factor. It allows Ford to deliver some of his best songs to date, with plenty of the type of playing fans are more used to seeing him summon live.