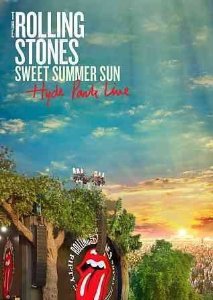 It’s become hip lately to make fun of the Rolling Stones. You’ve heard all the jokes about how bad they look, how grandpa should stay home – everything that goes with their advanced age. While it may elicit a quick laugh, this film of their return to Hyde Park in London in 2013 dispels any notion that they are over the hill and, in fact, could serve as the basis for the argument that it really doesn’t get any better than this.

A tight, focused band runs through a setlist that is basically iconic. Mick Jagger struts, sings, and gyrates through the songs with a swagger that singers four decades his junior only dream of. Keith Richards and Ronnie Wood play their asses off. Charlie Watts is a drum machine with soul. The auxiliary players, like Chuck Leavell on keyboards (he’s also their musical director), bassist Darryl Jones, and Bobby Keys and Tim Ries on saxes are wonderful.

Best of all, Mick Taylor guests on an incendiary “Midnight Rambler.” His first-ever gig as a Stone was at the ’69 Hyde Park show.

Whether they tour again or not, this DVD shows a top rock and roll band in perfect form.