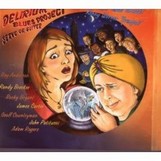 This live CD begins by asking the musical question, “What Is Hip?” Singer Roseanna Vitro and her octet transform Tower Of Power’s dexterous funk anthem into a cool, would-be jazz standard – thus, answering the question: That, ladies and gentlemen, is hip.

Vitro’s voice and delivery are reminiscent of Dan Hicks’ former Hot Lick, Maryann Price, while Adam Rogers’ guitar solo owes a debt to Robben Ford. Introducing “Goodnight Nelda Grebe, The Telephone Company Has Cut Us Off,” Vitro acknowledges the influence of its composer, Tracy Nelson, and leans (perhaps unconsciously) on her mentor’s style a bit too much.

As you might have gathered, the m.o. here is taking songs from outside the typical jazz repertoire and jazzing and/or bluesing them up. In lesser hands the concept might have been a novelty at best, but, thanks to pianist Kenny Werner’s arrangements (and the considerable musicianship of players like trumpeter Randy Brecker and saxophonist James Carter), the result succeeds on its own terms. (Anyone who just had an acid flashback to Mel Torme’s cover of “Secret Agent Man,” fear not; this is nothing like that.)

Other sources range from Mose Allison to Lil Green (a tasty vocal/bass duet with John Patitucci’s upright) to Dan Penn and Spooner Oldham. There’s a lot of untapped potential in this vein – which will hopefully be revealed in future sequels.