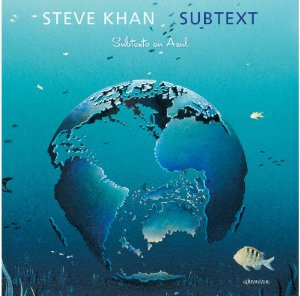 After a career of close to 40 years, Steve Khan now delivers Subtext, a mesmerizing Latin-jazz offering. But don’t assume that this is just another retro-Bossa album. The compositions, chord work, and improvisations speak to the dark, complex sounds of jazz-rock, a perfect starting point for Khan’s exploratory solos.

Unlike the dirty tones of his late-’70s work, Khan deploys a fat, clean sound here. You also can’t help but make the association between this music and the explosion of Latin-jazz music during Khan’s student days in the 1960s – think of period guitar wizards like Gabor Szabo, Bola Sete, and Charlie Byrd, mixed with Pat Martino and Larry Coryell, who we can safely assume were influences on the young guitarist.

To get us in the Latin mood, Khan brings in several percussion stars, monster drummer Dennis Chambers and, on the terrific opening track “Bird Food,” trumpet genius Randy Brecker.
As for the guitarist, it’s great to listen to a real wizard at work, both paying homage to the old archtop masters with the sweet tone, but keeping it fully modern on ESP and Gibson solidbodies and semi-hollowbodies.

This article originally appeared in VG‘s October’14 issue. All copyrights are by the author and Vintage Guitar magazine. Unauthorized replication or use is strictly prohibited.