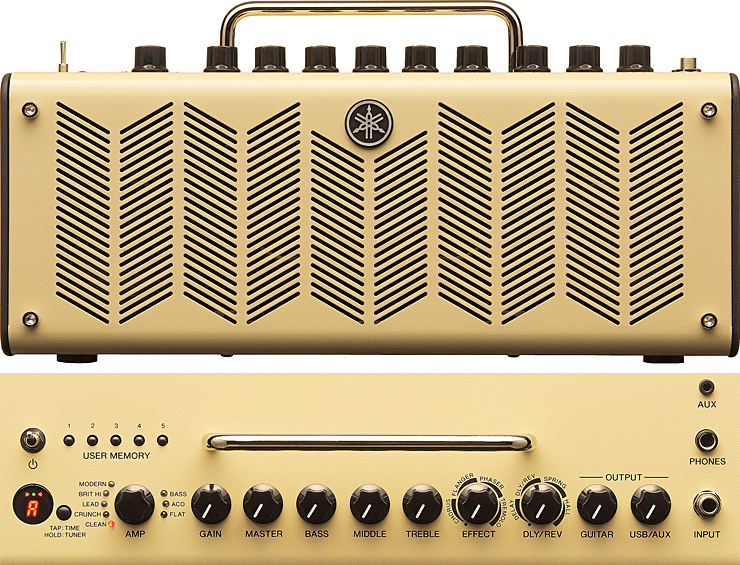 As a rule of thumb, practice amps are a compromise. Blissfully portable, they typically lack tone and features. Yet whether in a bedroom or hotel room, a practice amp should help inspire an artist by making practice more pleasure than chore. Yamaha’s THR10 is a definite step in the right direction.

On its surface, the THR10’s small footprint gives the impression of a typical lunchbox-style amp. But don’t be fooled. A 10-watt (five watts in each channel) feature-packed combo, it runs on eight AA batteries or the included AC adaptor, and its control layout includes a tap tempo/tuner feature, five presets, a rotary control for selecting among its eight amp models, a Gain control, master Volume, three-band Tone control, Effects selector, Reverb/Delay control, and individual controls for the guitar Volume and the USB/aux inputs. Its sound is relayed via two onboard speakers.

The amp’s modeling section, as well as its effects section, employ Yamaha’s VCM technologies similar to that used in their high-end digital mixers and effects. The amp simulations include Clean (classic 6L6 circuit), Crunch (American Class A), Lead (British Class A), Brit Hi (British high-gain), Modern (6L6 high-gain), Bass, ACO (acoustic/electric), and Flat (good for instruments other than guitar). Connections include a standard 1/4″ input, 1/8″ TRS aux input, 1/4″ headphone jack, and a USB jack that links the amp to a computer or iPad, where the user can edit its onboard effects, save them as presets, and record to the computer/tablet’s hard drive using the included Cubase LE software.

Powering up, the THR10 welcomes the user with a warm, simulated tube glow behind its metal grille, courtesy of a few amber LEDs. Plugging in, its modeling circuitry renders reasonably realistic tube tones, all with a touch-sensitive feel that responds to pick/finger attack while producing overtones and a warm overall sound. This little amp’s combination of well-designed drivers and ports helps it produce a surprising degree of low-end response and very accurate midrange – not at all boxy-sounding like so many small amps. Each model has its own tone and voicing, accurate to its namesake, which allows dialing in a variety of sounds from county chicken pickin’ to full-on metal.

The amps effects are split into two categories – one for modulation-style effects like chorus, flanging, phase and tremolo, the other for reverbs and delays – and each has their own controls. The effects get deeper and more intense as they’re dialed up, while the delay time is set via the tap-tempo button. In general, the effects have a spacious, high-quality sound that need little, if any, tweaking. Most newer practice amps are fitted with an Aux input for a music player, the THR10’s sound gives tracks a better, more-realistic sound. Preamp selections for acoustic/electric, bass, and an uncolored one called Flat expand the THR10’s versatility and make it great for a range of instruments including electric guitar, acoustic guitar, and bass.

The Yamaha THR10 is small, light, has studio-quality effects, interfaces with personal electronics, and provides a variety of tones that make you want to plug in and play – like a good practice amp should.