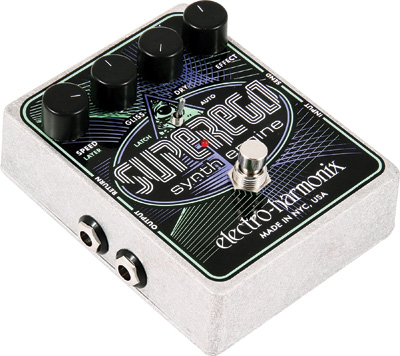 Building on the success of its Freeze Sound Retainer (a.k.a. the world’s shortest looper), the Electro-Harmonix Superego Synth Engine is a “short” sampler pedal, but with more control and options.

The Superego not only allows the player to capture or freeze notes and chords on the fly, but manipulate them with synth-style attack/release controls. The Superego uses EHX’s familiar metal chassis, with four chassis-mounted controls, one three-way toggle switch, one heavy-duty footswitch, chassis-mounted 1/4″ in/out and effect loop jacks, and a 9-volt power adapter (included) jack. The controls consist of a Speed control to set the attack and release (it doubles as a Layer volume control in Latching mode), a Gliss control (similar to a portamento control on a keyboard, allowing the player to glide into notes), a Dry mix control to set the volume of the uneffected guitar signal, and an Effect mix control to set the level of the frozen note or chord.

Running the Superego with a Fender Tele Custom reissue, a tube-driven 1×12″ combo, and a host of other E-H effects (Stereo Pulsar tremolo, Memory Boy delay, Big Muff, and Micro POG) patched into the Superego’s loop, we found a short learning curve when it came to capturing and freezing notes. Unlike a looper pedal, with which the player hits the footswitch as soon as they play the note or chord, the Superego works better if the footswitch is hit when the note or chord is in “full bloom,” resulting in a stronger, louder sample. It does take a bit of experimentation to set the Speed and Gliss controls just right for the type and style of note or chord to be frozen, but the real secret to unlocking the potential of the Superego is inserting a pedal or multiple pedals into its effects loop. The Superego’s loop applies the effects in the effects loop to the wet signal only, allowing the dry signal to remain unaffected. This allows manipulation of the “captured” note or chord with anything from tremolo for a pulsating low-frequency oscillator effect, to overdrive for a square wave effect, to delay and pitch for a sci-fi effect. In combination with the ability to control attack and release via the Speed and Gliss controls, this produces a real synth-style sound, texture, and control like one would get from a traditional keyboard synth. From using a polyphonic octave generator in the effects loop for a soft organ-style undertone, to inserting the Pulsar and Big Muff for a fat overdriven isolating sound, the Superego added several new dimensions and textures. A board could be filled with pedals just for the effects loop on the Superego – the combinations are endless.

The EHX Superego Synth Engine probably won’t make many “desert island” pedal lists, but its straightforward design and the vast possibilities of its effects loop make it a great tool for experimenting with synth sounds and textures – and rediscovering some of those dusty old pedals.