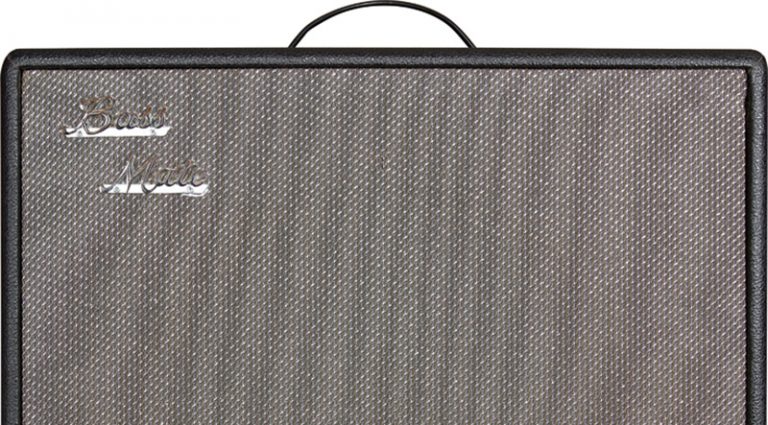 Canadian amp maker Traynor gets a lot of respect in some circles for turning out solid, good-sounding tube amps that are built with quality components and, in many cases, can easily be modified toward a sonic condition more substantial than when they left the factory. It’s also frequently noted that they “blend British and American characteristics,” and that is often true, but this extremely-early-’65 Bass Mate – a real “ground zero” amp for Traynor’s smaller vintage combos – displays origins set more firmly in the latter geography.

With its two 6V6 output tubes and 5Y3 rectifier tube, and just a single channel with Volume and Tone controls, this early Bass Mate is so darn close to the tweed Fender Harvard we examined a couple issues ago, circuit-wise at least, that it has to be more than coincidence. As seemed to happen time and again, by the time a Fender design migrated across the border to be adapted by another manufacturer, Fender had moved on to another era. The fact that this gives us a raw, gritty, tweed-like combo in a different (and far more-affordable) guise is no bad thing at all.

Tube spotters will scan the YBA-2’s lineup and declare, “Ah, but it has a 6AV6 preamp tube in the first stage compared to the Harvard’s 6AT6.” True, but that’s really just like putting a 12AX7 in place of a 12AT7 or 12AY7. The 6AV6 is a single-triode preamp tube mounted in a seven-pin socket, with a gain factor similar to that of a 12AX7, and in this circuit it produces a sound similar to that tube. Which is to say, it’s hotter than either the AT or an AY variant, and gives a little more drive to the front end. Armed with its 15″ speaker, compared to the Harvard’s 10″, the Bass Mate can take it, too, though it does tend to get gritty and nasty pretty quickly, especially with humbuckers. It’s hard to see how this thing sufficed as any kind of bass amp at all, really, other than at low, sub-drummer practice levels; but as with so many bass-intended designs of years past, it makes a glorious guitar combo, particularly for recording.

To help us stop hammering the Harvard comparisons for a moment, though, this amp’s owner, Steve Cole, looks back to the Brit-meets-yank analogies in his assessment of the Bass Mate’s tone.

“It really does sound like a tweed Deluxe meets 18-watt Marshall,” he said. “It has a better low-end than a cranked up Deluxe and better clean sounds than most Marshalls. The amp is very responsive to changes on your guitar’s Volume knob and can go from clean to scream with the role of the dial. It sounds great with single-coils or humbuckers – these simple, clean circuits are just incredibly responsive to any changes you introduce.”

And that’s where the secret lies – a simple, clean circuit, rammed through quality Hammond transformers and a few other nifty tidbits that lurk under the hood. The tidy hand-wired turret board shows there isn’t a lot inside the YBA-1 to get in the way of its tone. A lone signal capacitor (or “coupling cap”) links the preamp tube to the phase inverter, and two more take the split signal from there to the output tubes. That’s it, other than the ceramic-disk capacitor on the Tone control, which doesn’t carry the signal as such, but bleed its high-end response to ground as you turn it counterclockwise.

Unlike later YBA-2b Bass Mates, which are still cool and desirable little amps, the YBA-2 is also cathode-biased (much like a tweed Deluxe) with a 250-ohm resistor and a bypass cap to fatten it up. This doesn’t provide the relatively tighter, firmer low-end of the later fixed-bias YBA-2a, but gives many guitarists another reason to love it all the more. And while all of the YBA-2 Bass Mates with 6V6 output tubes are rare in comparison to the later 2b models with EL84s, this one is even more so, given its 5Y3 tube rectifier, a feature that was changed in favor of solidstate rectification pretty early in the run (again, a move that favored low-end reproduction, but deprived the Bass Mate as guitar amp of a tad of its touchy-feely goodness). Around the same time, the Bass Mate also lost the seven-pin 6AV6 in favor of a tamer 12AU7 – which makes an easier sub with a 12AX7, but is a step down, gain-wise, in and of itself, when used stock.

One of the first tips many owners of vintage Bass Mates suggest is swapping their Marsland speaker with something more bodacious. In this case, that’s not necessarily so; another feature of this rare ’65 YBA-2 is its Jensen-branded EMC1500 speaker manufactured under license by Radio Speakers of Canada Limited (RSC). Labeled EM1500 as made by Jensen in the United States (the “C” presumably being for the “Canadian” licensed version?) this was a then-contemporary design from Jensen’s robust Electronic Musical Instruments series, which carried a Syntox-6 ceramic magnet and was capable of handling 60 watts of power. Your contemporary 15″ of choice might still prove a good move, or you could replace the original baffle with one cut for a 12″ speaker to expand your selection exponentially, but this Jensen-designed RSC driver is a major leap up from the cheap Marslands that soon after populated Traynor amplifiers, and is a darn good-sounding speaker in and of itself.

Designed by bassist-turned-amp guru Pete Traynor as the student-sized follow-up to his larger Dyna-Bass amplifier of 1963 (later renamed the YBA-1 Bass Master), the original Bass Mate never really was much of a bass combo, but that has always been part of the fun. Without the distraction of the tremolo and reverb that would clutter the Guitar Mate circuit, and with its raw, rich cathode biasing and tactile tube rectification, it really is a fast track to the origins of great rock-and-roll guitar tone, and it’s hard to go far wrong with that. 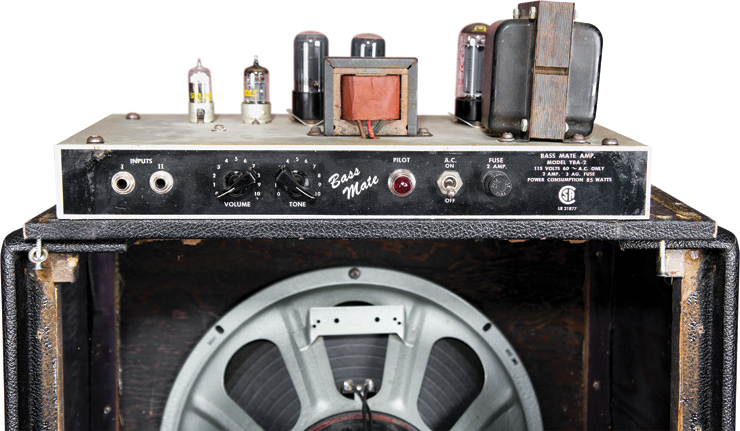