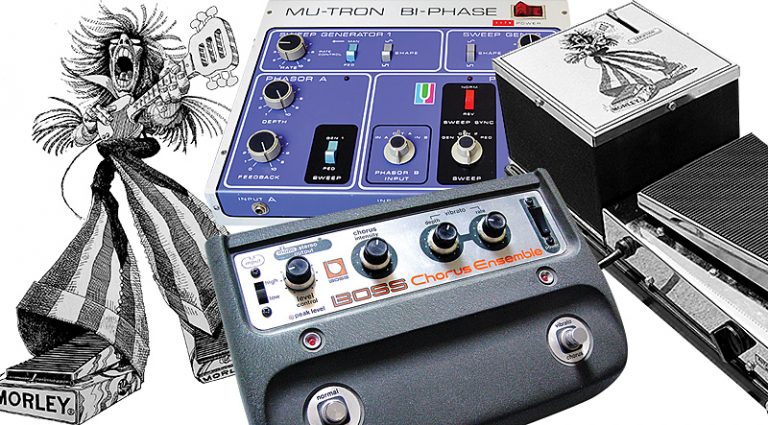 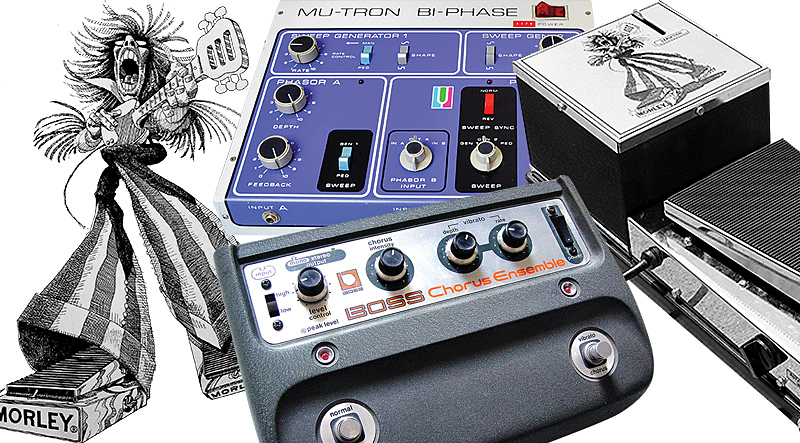 Bear with us for a moment as we get technical. As electronics textbooks explain it, a modulation effect is one that varies the pitch, intensity, frequency, amplitude, phase, or other characteristic of an electromagnetic wave.

In guitar-speak, this simply means a stompbox that messes up your sound so it’s way cool – think tremolo, vibrato, phaser, flanger, chorus, wah and envelope filtering, and more.

Modulation adds depth and motion to a guitar’s sound. In olden days, effects inventors tried all sorts of Rube Goldberg engineering. Nowadays, analog designers typically create circuits that split signal and goof with it, delaying part of the signal, pushing it out of phase, moving it, duplicating it, and so on.

But enough with the pseudo electronics; let’s get down to business and celebrate 22 classic modulation effects.

Despite what the headstock of the Stratocaster said, Tremolo is a modulation of volume (not pitch!), often done by interrupting or literally turning a signal on and off. The prime example is Tommy James and the Shondells’ “Crimson And Clover.”

Launched in ’46, the DeArmond Tremolo Control is believed to be the earliest stand-alone guitar effect. It modulated the sound with a quaint electromechanical design; guitar signal runs through a motor-driven brass vial filled with an electrolyte, which allows more or less signal to pass, “tremulating” the volume. Bo Diddley loved it, as does Billy F Gibbons – “You can go from mild to wild.”

Mike Fuller’s Fulltone Supa-Trem arrived in ’96 and set the standard for analog tremolo pedals. Gone is the DeArmond’s sloshing liquid, replaced with reliable modern electronics and multitudes of lovely modulation.

Vibrato is a varying of a note’s pitch – that wobbling, crying sound created with the swinging motion of a fretting finger or Bigsby tailpiece. Consider one of many solos by B.B. King or the whammy gymnastics in many a Jeff Beck solo.

Magnatone’s amps of the ’60s were famed for their “true vibrato,” but it took until the 1986 debut of the Boss Vibrato VB-2 for guitarists to have it at the command of their big toe. This most collectible of all Boss pedals also includes desirable side effects in the Rise Time and Unlatch modes, and to this day remains one of the sweetest vibrato boxes out there.

Phasers shift part of a guitar’s signal out of phase with the other, creating that funky “swooshing” sound we know and love; think “Eruption” by Eddie Van Halen or Pink Floyd’s “Have A Cigar.”

Call it an artificial phaser, but the electromechanical rotating-speaker design crafted by Donald Leslie in 1941 to emulate pipe-organ sounds became the model of many phaser designers. CBS/Fender bought the Leslie company in ’65 and made the sound available to guitarists with the Leslie Model 16 and Model 18 in ’66, followed by the Fender Vibratone in ’67. Yes, they were big and heavy, but oh, what a sound!

Made by Japan’s ultimate effects lab, Shin-ei, the ’69 Univox Uni-Vibe was billed as a rotary-speaker emulator, but actually worked like a phaser. Inside, it had four pairs of light bulbs and cells that spun out a liquid tone that Jimi Hendrix took to new heights on “The Wind Cries Mary.” Can’t afford an original? Shin-ei used the guts of the Uni-Vibe in other pedals such as its Resly Machine (Japanese for “Leslie”), Jax Vibra Chorus, and probably more.

The 1971-’73 Maestro Rover Rotating Speaker RO-1 was indescribably hip, with looks that made it easy to mistake for a UFO. David Gilmour remains a fan; cue up Pink Floyd’s The Division Bell, where he wails through not one, but two customized Rovers.

The MXR Phase 90 introduced in ’72, creating what many consider the ultimate analog phaser. Just ask EVH.

Arriving in ’75, the Electro-Harmonix Small Stone Phase Shifter was another instant classic – and reissues are still offered today.

Effects mastermind Mike Beigel’s variable-resistor-based Mu-Tron Bi-Phase of 1974-’77 came with so many controls and options you might think you were piloting a spacecraft instead of just playing rock and roll. Yes, this was truly rocket science – and remains one of most valuable, sought-after phasers.

The Morley RWV Rotating Wah blended Leslie-like sounds with a wah-pedal foot control in a monstrous chromed tone machine. At its heart was a rotating disc inside a metal drum filled with electrostatic “mystery” oil, similar in concept to the DeArmond Tremolo. Uniquely cool, then and now.

The 1970s Multivox Little David was a Leslie simulator in a box, but with the added benefit of control knobs allowing you to dial in the depth and speed of your rotating-speaker sound. Sublime – and super rare.

Flangers are basically the evil twin of phasers, taken to extremes. While Jimi could provide the example for most every modulation effect listed here, his flanger on “Bold As Love” was classic stuff.

It was big, it was expensive, and it was ugly, but the A/DA Flanger set the standard for the harmonic swirling sound. Launched in ’77, it was gone by ’83, but reissued starting in ’96.

The MXR Flanger and Electro-Harmonix Electric Mistress followed on the heels of A/DA’s flanger. Both are solid, usable, and collectible boxes.

Mike Beigel’s Mu-Tron Flanger was more complex and spacey than any other flanging apparatus, natch. Offered from 1977 to ’80, it remains the most valuable and sought-after to this day.

Chorus is perhaps the easiest modulation effect to grasp – the doubling of signal is created simply by splitting and delaying part of it. Still don’t get it? U2 and the Police knew their way around a chorus pedal.

Stepping over the lines and offering both chorus and vibrato effects, the Boss CE-1 Chorus Ensemble led the way and remains one of the best chorus boxes ever. The CE-1 of 1976 to ’84 evolved through several generations.

The Vox Clyde McCoy Wah-Wah Pedal was designed to make a guitar sound like a trumpet with modulation and muting provided courtesy of a toilet-bowl plunger – that’s why it was named for horn man McCoy. Offered from 1967 to ’68, it went through several variations and many fans consider the first to be the real McCoy – the most expressive of wahs, and certainly the rarest.

Mike Beigel’s Mu-Tron III introduced guitarists to the concept of an envelope filter, and funk has never been the same. Taking a cue from the wah, this novel stompbox provided the clipped-note vibe of a Vox Clyde McCoy, but without the need for the guitarist’s foot rocking the pedal to roll the notes. Bootsy Collins and Jerry Garcia were diehard converts.

Octave Dividers are a simple concept that sounds far out. And fear not – no octaves are actually harmed in the making of the sonic magic. The effect basically duplicates the notes and the human ear perceives it as doubling the frequency. Again, think Jimi – “Purple Haze” is the ideal example.

Sonic scientist Roger Mayer handmade only a half-dozen or so Octavia pedals circa 1964, and never copyrighted the name or released the pedal on the market, so Tycobrahe offered the first production version in ’76.

The Mu-Tron Octave Divider of 1977 was the pinnacle, offering gorgeous tone and a wealth of controls – thanks again to Mike Beigel. 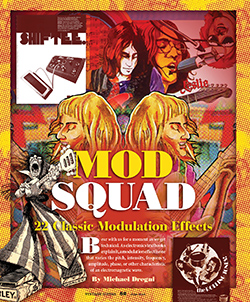