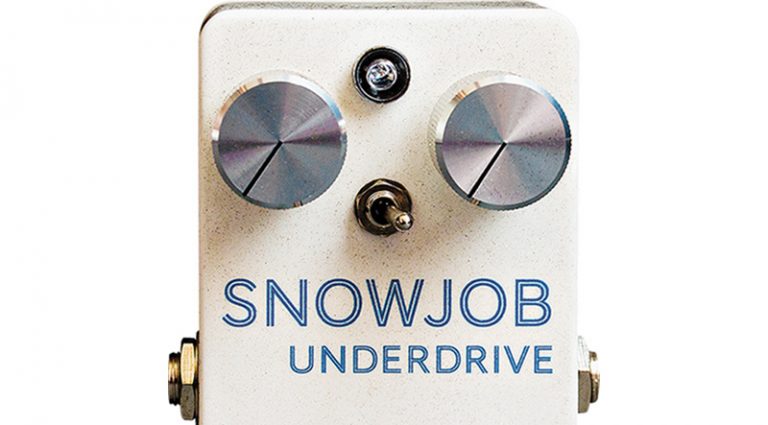 You may be wondering, “What in the world is an ‘underdrive’ pedal?” Good question.

Well, you know the traffic-jam of overdrive pedals you likely have crowding around your amp, all designed to push it into blissful distortion? An underdrive does the opposite. It drives from your guitar.

Which brings up that Beatles-versus-Stones-type debate about the benefits of amp volume versus guitar volume. With Lotus’ Snowjob – either in concert with an overdrive, or not – you can fiddle with both.

Lotus Pedal Designs is the brainchild of effects builder Sean Erspamer. Based in balmy Duluth, Minnesota, on the Lake Superior riviera, he hand-builds his pedals in small batches.

Erspamer’s philosophy is all about simplicity: He wants your focus to be on playing guitar, not fiddling with your gear. The Snowjob reflects that – as do the other pedals in Lotus’ lineup, including the Iceverb; his most popular effect, the Golden Echo; and the White Overdrive, as played by pal Alan Sparhawk of Duluth’s Low.

We plugged a P-90-equipped ’53 Gibson ES-5 into the Snowjob, then straight into a Fender Vibro-King. The pedal can be powered by a 9-volt battery or AC adaptor; we ran it via wall power.

The Snowjob is a dual-mode drive. With the toggle switch to the left in “white snow mode,” the pedal is almost transparent, acting like a boost. But it also adds harmonics to fill in the spaces between notes, making them truly sparkle. It’s an absolutely lovely sound.

With the toggle to the right in “yellow snow mode” (you don’t have to be from Duluth to get that), the pedal is more aggro. It adds sustain plus harmonic clipping to the spaces between the notes, like an amp dialed to 11.

Because of the Snowjob’s construction, it works best when first in an effects chain, Erspamer says. That’s to say, it may not play well with others when stacked after other stompboxes, especially fuzzes.

Put it in front of a traditional overdrive, though, and you can push your sound much harder and with more control over the shape of the distortion. We tried it in concert with a vintage Vox Tonebender, and got both the fuzz and that sweet sparkle.