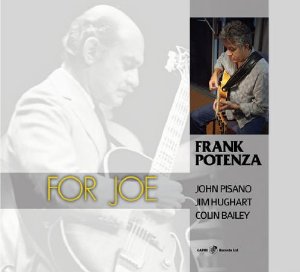 As Concord Music continues its Original Jazz Classics Remasters, we get three records recorded for Pablo Records from the ’70s that feature Joe Pass on guitar. He’s normally remembered for the solo work he did on his Virtuoso series. But as these albums show, he was also a ﬁne sideman who could back soloists with ease and, when called on to solo, supplied his own firepower.

Pass’ solo work highlights “I Got Rhythm” with him and pianist Oscar Peterson locking in. His work on Gillespie’s “Be Bop (Dizzy’s Fingers)” is stunning hyperspeed soloing. And his work on “Nuages” on Skol is worth the price of admission in and of itself. All three of these records are welcome additions to a jazz collection.

Frank Potenza was a student and friend of Pass, and he recruits former Pass bandmates John Pisano on guitar, bassist Jim Hughart, and drummer Colin Bailey. It’s a simple, swinging affair that allows both guitarists ample room to show their skills. Potenza proves he learned his lessons well, and his wonderful lone guitar intro to “Do Nothin’ ’Til You Hear From Me” is masterful. The record is a nice tip of the cap from former friends and a student who was paying attention.